Update: The Staten Island grand jury ​voted not to indict NYPD Officer Daniel Pantaleo for his role in Eric Garner's death this summer.

Mayor Bill de Blasio today touted crime statistics showing the last four months to be the safest on record since 1993, after reforms to policies like stop-and-frisk that his critics had argued would cause crime to climb.

“It will end in buckets of blood on city streets,” wrote The New York Post’s Andrea Peyser.

In the aftermath of a traumatic summer of nonstop police brutality, LGBTQ youth -- from Ohio to Hong Kong, Staten Island to Ferguson -- are dreaming. 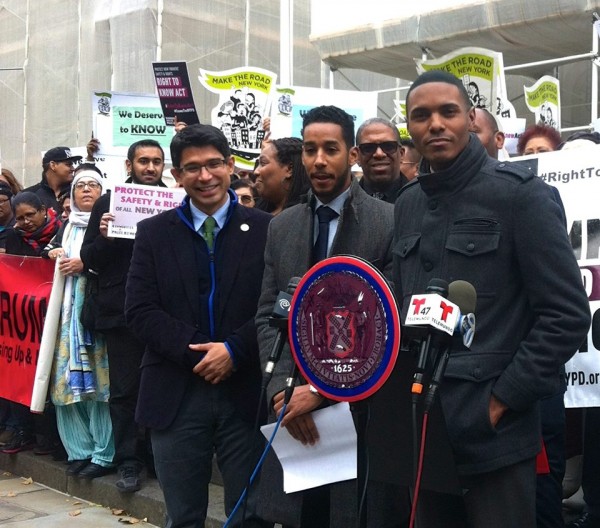 NY1 Noticias / Pura Politica
La posesión de pequeñas cantidades de marihuana ya no desembocará en arresto, sino en multa o citación judicial. El concejal de Brooklyn y Queens Antonio Reynoso, Priscilla González, de Comunidades Unidas por una Reforma Policial y Walter Rodríguez, de Bronx Defenders, analizan las políticas policiales del alcalde Bill de Blasio y las relaciones entre la Uniformada y la comunidad latina y afroamericana.
Capital
Allies of Mayor Bill de Blasio gathered outside City Hall Thursday afternoon to urge passage of a bill they say is in line with his goal of improving police and community relations but that he has opposed. The bill, dubbed the Right to Know Act, would require officers to get verbal or written consent before searching a person when there is no warrant or probable cause. De blasio told reporters on Wednesday he doesn’t support the bill, saying it may interfere with officers’ ability to perform their job.
DNAinfo
CITY HALL—The NYPD would be required to tell people that they can refuse a search where there is no probable cause or a warrant, according to legislation introduced in the City Council Thursday. Called the "Right to Know Act," the legislation would require officers to identify themselves and explain why the individual is being stopped or questioned. They would also have to explain that individuals can deny consent to a search in certain instances.
NY1 News

The City Council’s latest attempt at reining in the New York City Police Department, unveiled at a news conference Thursday, would require police officers to explain the reason for conducting a stop and to identify themselves. Perhaps more controversially, it would also require that they inform people of their right to refuse a search when applicable.

The Second Circuit Court of Appeals’ ruled to grant the City of New York’s request to withdraw its appeal, deny police unions’ appeal to intervene and lift the stay on remedies in Floyd v. City of New York.