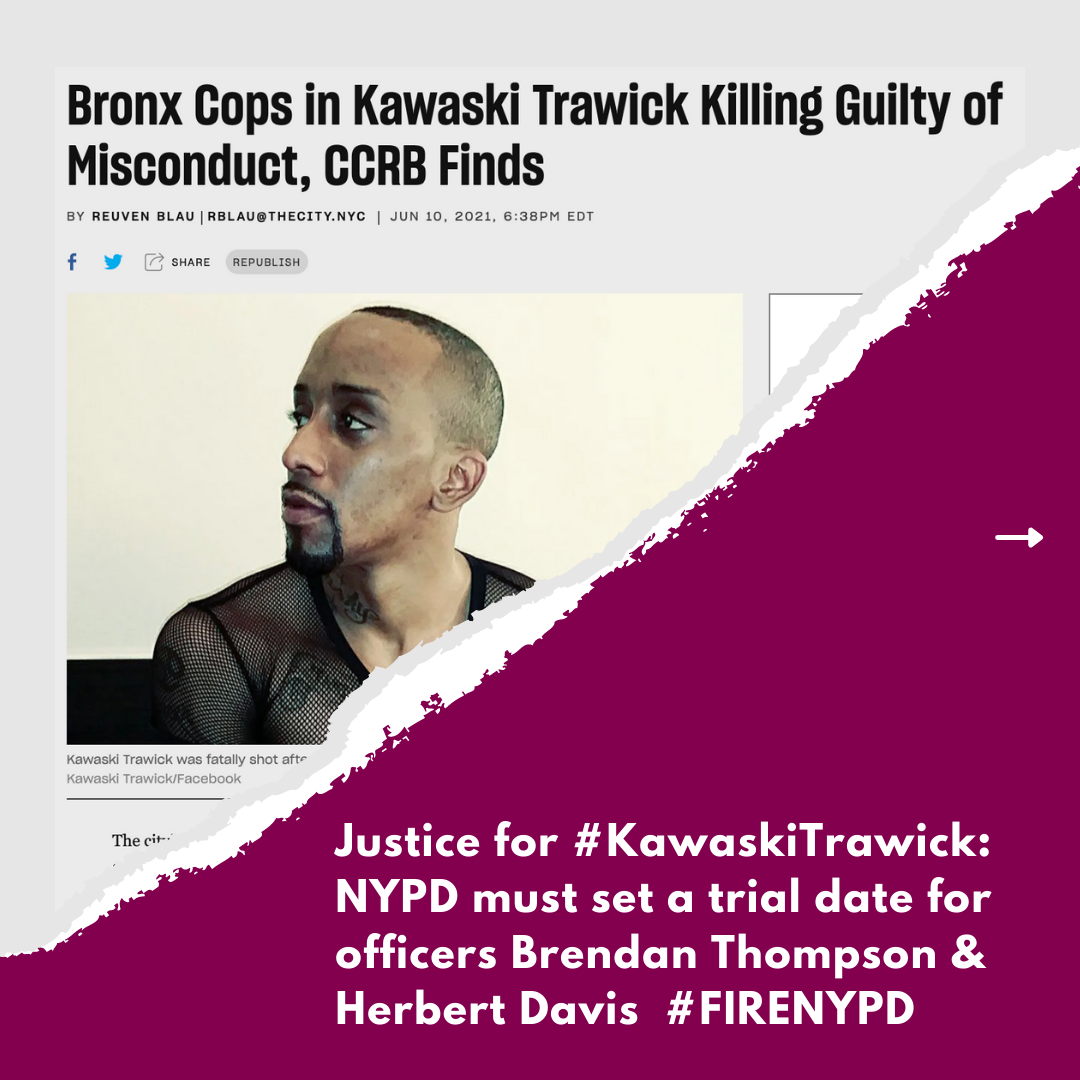 On April 14, 2019, 32-year-old Kawaski Trawick, a Black queer man, was locked out of his apartment at Hill House in the Bronx. The fire department let him into his apartment. By the time NYPD officers Brendan Thompson and Herbert Davis arrived, Kawaski was already back in his apartment cooking. Officer Davis broke the chain off his door to illegally gain entry into his home. Kawaski asked the officers, “Why are you in my home?” and told them, “I’m cooking.” The officers repeatedly escalated the incident. Thompson and Davis shouted orders at him and refused to answer Kawaski’s questions. Thompson tased him without cause and then shot and killed Kawaski within 112 seconds of their arrival.

The NYPD sensationalized that Kawaski was holding a bread knife to justify shooting him; however, he held a knife because he was cooking in his home. Only one officer, Brendan Thompson, had his body-worn camera. The NYPD refused to release complete, unedited footage of the incident for almost two years – only releasing unedited footage to a legal organization, following a FOIL request. In December 2020, the NYPD released a selectively edited and incomplete video of the killing. Officers on the scene can be heard saying, “Nobody, just a perp” immediately after Kawaski’s killing in response to an officer asking if anyone was injured. It is also clear from footage that Thompson and Davis did not directly provide care to Kawaski after he was shot.

In April 2021, it was made public through a ProPublica report that the NYPD found “no wrongdoing” n the NYPD killing of Kawaski Trawick. Kawaski’s family found out about the refusal to discipline Thompson and Davis through the news media.

The CCRB substantiated charges against officer Brendan Thompson and Herbert Davis including abuse of authority for entering Kawaski’s home, failing to obtain medical treatment, use of force against Kawaski, and pointing and firing a gun at Kawaski.  The family is calling on the NYPD to immediately schedule disciplinary trials for the officers.

Family of Kawaski Trawick, elected officials and supporters rally outside One Police Plaza demanding the firing of officers who killed Trawick in 2019

Today, the parents of Kawaski Trawick, the Justice Committee, Communities United for Police Reform, and family attorney Royce Russell attended the pre-trial court conference and gathered with elected officials, including Public Advocate Jumaane Williams, City Councilperson Pierina Sanchez, and other community supporters at One Police Plaza to denounce further obstruction and delays in the disciplinary proceedings against NYPD Officers Brendan Thompson and Herbert Davis, who killed Mr. Trawick on April 14, 2019 in the Bronx.
ProPublica

The judge said at an October hearing in the case that the NYPD had been operating in “bad faith.”

Body-worn cameras have been widely adopted by police departments over the past decade and can provide crucial evidence in misconduct cases. But like many police departments, the NYPD maintains full control over the footage, deciding what gets released and when.

Today, the family of Kawaski Trawick is calling on the CCRB and the NYPD to schedule discipline trials for Brendan Thompson and Herbert Davis, who killed Kawaski while he was cooking in his apartment. 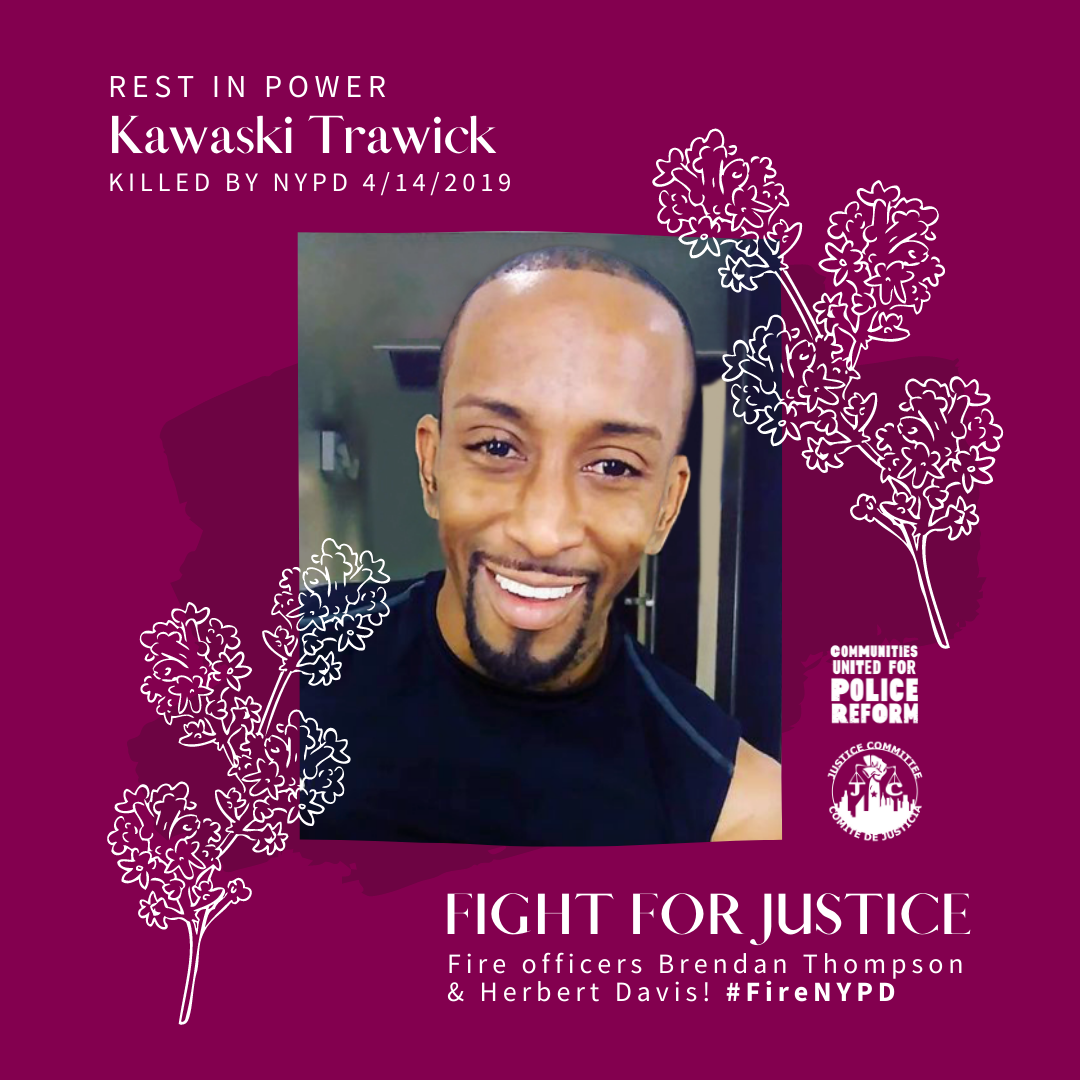