This morning, in a rare move, the New York State Appellate Division – First Department denied the de Blasio administration's request to stay a historic judicial inquiry into violations and neglect of duty by top NYPD and City officials—including Mayor de Blasio—related to the killing of Eric Garner. The court ruled that the inquiry may proceed.
For immediate release: March 21, 2021

Last week, lawyers for Gwen Carr, mother of Eric Garner, and other petitioners, asked that the City of New York turn over documents and records as part of discovery in a

New York, NY – Lawyers for Mayor de Blasio and the NYPD are maneuvering once again to delay a public judicial inquiry into the violations and neglect of duty by Mayor de Blasio, and top NYPD and city officials, rela

New York, NY (December 22, 2020) – In October, the City of New York filed a notice of appeal of NY Supreme Court Justice Joan A. Madden’s September 24, 2020 decision to allow a public judicial inquiry into the killing of Eric Garner by NYPD officers to proceed. Lawyers for Mayor Bill de Blasio and the NYPD then argued that Justice Madden could not, and should not, proceed with the public inquiry while their appeal was pending – effectively putting the case on ice.

New York, NY (October 5, 2020) – In response to Mayor Bill de Blasio’s legal maneuvering: beginning an appeals process late Friday, October 2nd, seeking to stop a public judicial inquiry into his potential violations and neglect of duty in the killing of Eric Garner, as well as negligence and violations of duty by former NYPD Commissioner James O’Neill and other top NYPD officials, Gwen Carr, the mother of Eric Garner, and Loyda Colon of Communities United for Police Reform (CPR) issued the following statements:

(CNN)Eric Garner's mother has won her bid for an investigation into New York City's handling of the arrest of her son, the disciplining of officers involved in his 2014 death and the lack of medical care he was given by police officers, a state judge ruled.

Gothamist
A New York Supreme Court judge ruled Thursday that a judicial inquiry into whether the New York Police Department failed to properly investigate the police officers involved in the death of Eric Garner in 2014 can go forward. The ruling potentially clears the way for Mayor Bill de Blasio and former NYPD Commissioner James O’Neill, to be compelled to testify under oath about how they handled the aftermath of Garner’s death.
For immediate release: September 24, 2020

New York, NY (June 3, 2020) – Today, Communities United for Police Reform (CPR), the mothers of Ramarley Graham and Mohammad Bah, sister of Delrawn Small and elected officials emphasized why NYPD’s recent, frequent and detestable violence toward NYC communities underscores the urgent need for major cuts to the NYPD. The speakers shared how substantial cuts to NYPD’s bloated $6 billion budget are an essential measure to reduce police brutality and violence. Redirected, these funds can promote a strong and equitable recovery from COVID-19. 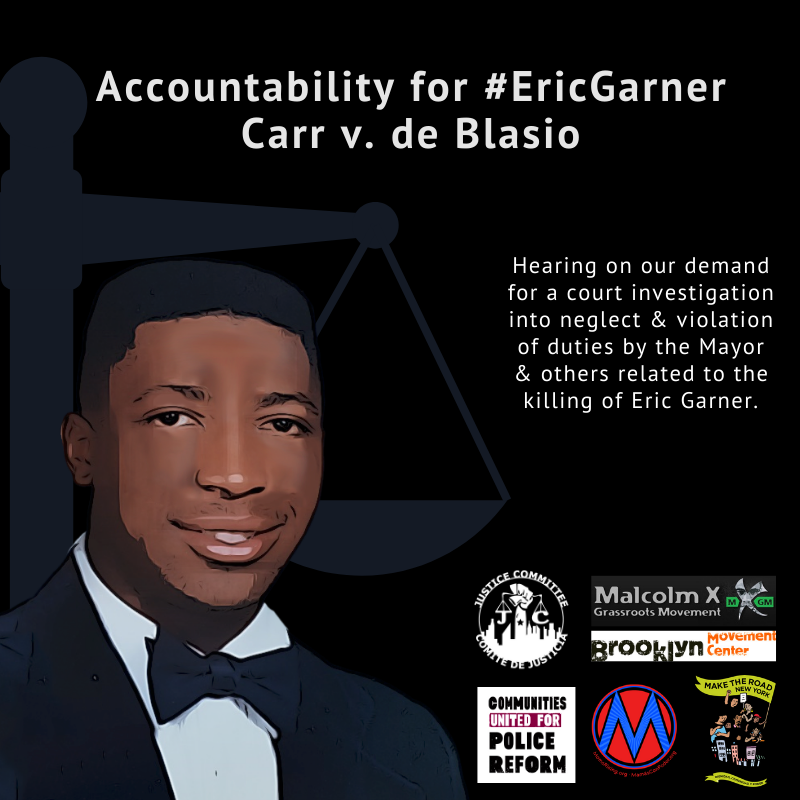