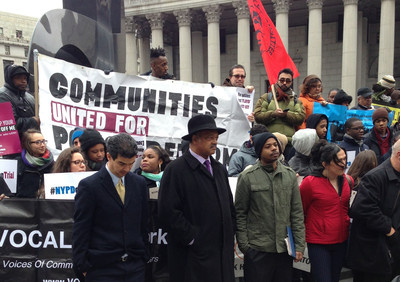 On August 12, 2013,  Judge Schira Scheindlin, presiding over the Floyd v. City of New York stop-and-frisk trial, ruled that the NYPD had indeed systematically violated the 4th and 14th Amendment rights of thousands of New Yorkers. In her nearly 200 page opinion on liabilities, she concluded "that the city’s highest officials have turned a blind eye to the evidence that officers are conducting stops in a racially discriminatory manner.” Judge Scheindlin also ordered remedies, including a court-appointed monitor, a reform process involving input from affected communities, and a pilot program to test body cameras for patrol officers to record interactions with the public. The trial and the verdict represent the culmination of over 15 years of organizing by communities in New York against discriminatory and abusive policing practices by the NYPD. During the period of the trial (March 18 - May 20, 2013) communities across the city mobilized daily to pack-the-court in support of putting the NYPD’s stop-and-frisk practices on trial. Click here for galleries of photos of mobilizations held during the trial to demonstrate the importance of the proceeding to New Yorkers from all walks of life across the city. Click here for a summary of the remedies ordered by the Center for Constitutional Rights. Communities United for Police Reform will be working to ensure that communities most affected by discriminatory stop-and-frisk are involved in the remedies process.