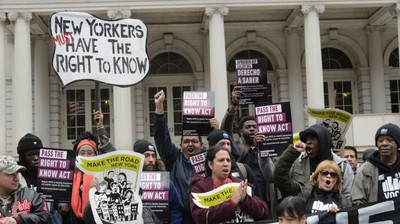 City Council legislation meant to force NYPD officers to identify themselves in certain nonemergency encounters — and distribute business cards when there is no arrest or summons — is continuing to lose support from foes of police misconduct.

The groups say the bill ultimately creates loopholes that cops can exploit.

“It fails to require officer identification in the majority of police-community interactions and allows for unchecked officer discretion in determining whether to provide an explanation for any law enforcement activity,” the groups said in a written statement.

But the groups are endorsing counterpart legislation, Introduction 541-C, to require NYPD cops to obtain audio or written proof of consent before searching a person absent a legal basis like a warrant.

In an interview Sunday night, the sponsor of the identity bill, Councilman Ritchie Torres (D-Bronx), rejected the notion that he capitulated. No piece of legislation can solve every conceivable problem with the police, he said.

“Should I sink the whole compromise based on traffic stops?”

He said his bill can form the basis for future legislation to cover more kinds of police encounters.

Meanwhile, the groups said, the search bill, sponsored by Councilman Antonio Reynoso, a Brooklyn Democrat, “will help to protect the rights of the people we represent against unconstitutional and coercive searches.”

The withdrawn support represents an unexpected divorce between Torres and the groups, who pushed the bills for years amid opposition by Mayor Bill de Blasio and the council speaker, Melissa Mark-Viverito, who refused to allow a vote on the bills, called the Right to Know Act. Both leaders have now endorsed the new bills.

Right to Know backers say more muscular legislation is necessary because people who claim police misconduct often are in the dark about who specific cops are.