Advocates push for repeal of 50-a ahead of session 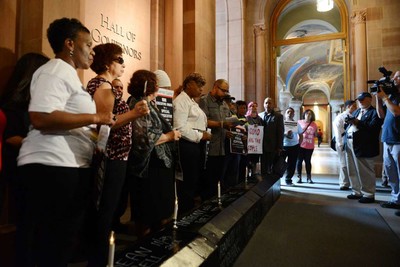 ALBANY — Advocates and family members of New Yorkers killed by police are calling on Gov. Andrew M. Cuomo and the Legislature to advance a full repeal of a state law that bars the release of disciplinary records of law enforcement officers.

Police reform proponents said they won't accept anything but a full repeal of the law "at a time of a systemic crisis, when there is a lack police transparency and accountability."

The letter was signed by 85 organizations and 16 family members of New Yorkers killed by cops, including the mothers of Anthony Baez, Amadou Diallo, Eric Garner and Akai Gurley.

"Full repeal of 50-a is the only way to guarantee an end to officially sanctioned secrecy for police misconduct and the systemic lack of discipline and accountability for misconduct," the letter states. "The public should have the right to know how police departments respond when officers engage in misconduct."

New York is one of three states in the nation that specifically protect police officers' records without judicial approval.

The case of Eric Garner, who died in July 2014 on Staten Island after a NYPD officer placed him in an illegal chokehold, brought increased scrutiny to the controversial law after it emerged that the officer involved, Daniel Pantaleo, had four previous substantiated complaints of abusive stops and searches on his record.

An appellate court is currently considering whether the Patrolmen's Benevolent Association can sue to stop New York City from releasing body camera footage, which the union argues is protected under 50-a.

Multiple bar associations and legal aid organizations have come out in support of a full repeal of 50-a, which they said does not serve the public's interest.

Rulings in 50-a cases have steadily expanded the state's interpretation of the term "personnel records," making New York more secretive about police misconduct than any other state in the nation, according to the state's Committee on Open Government.

"Section 50-a has it backwards," said COOG's Executive Director Robert Freeman in a statement. "Repeal of section 50-a would require government agencies to disclose or withhold records regarding police officers based on the same standards as those applicable to other public employees. It's time for the Legislature to level the playing field."

A 50-a repeal bill, sponsored by Democratic Assemblyman Daniel O'Donnell, D-Manhattan, has not moved out of committee. It currently lacks a sponsor in the state Senate.

Advocates hope there will be more movement on the legislation in 2019, as the Senate and Assembly will both be controlled by Democratic majorities.

Spokespersons for the Assembly and Senate majority conferences said the issue would be revisited, along with other criminal justice reform measures, in the session that begins next month.

Cuomo's office did not immediately respond to a request for comment.