But for some, that simply isn’t good enough.

“I am here today to send a message to Commissioner Bratton—training is good, training is not enough,” City Councilwoman Rosie Mendez said during a rally led by Communities United for Police Reform.

The advocates rallied outside City Hall as Mr. de Blasio and Mr. Bratton held a round-table with Staten Island community leaders and Rev. Al Sharpton to discuss the fallout of the death of Eric Garner, shortly after an NYPD officer apparently put him in a prohibited chokehold.

Inside, the choreographed event sought to show Mr. de Blasio and his top cop were taking community concerns seriously—though even the public part of the meeting was not without overt tension.

Outside, there were chants like “N-Y-P-D, keep your hands off of me!” and signs that read “Broken Windows = Broken Lives.”

Speaking to reporters, Mr. Bratton seemed dismissive of the rally.

But demonstrators lambasted Mr. Bratton’s trademark “broken windows” policy of cracking down on small crimes—like selling loose cigarettes, which is what Garner was accused of doing before his encounter with police. They seized on another recent incident where video shows another police officer using a chokehold to subdue a pregnant Brooklyn woman who was illegally using a barbecue grill.

“We need real community policing. You don’t put a pregnant woman in a chokehold because she’s barbecuing,” Ms. Mendez said. “You have a conversation and you get her to stop barbecuing. Luckily, that did not turn into a tragedy as in the case of Eric Garner.”

Councilwoman Debi Rose, who represents the district where Garner lived and died, has lauded the quick response of the mayor and the commissioner, and has embraced the idea of re-training cops. Still, though she did not attend the rally, Ms. Rose also wants more to be done.

“Re-training is not the be-all and the end-all. We’re looking at the use of cameras, we’re looking at changing the law in terms of chokeholds, so where’s multiple, multiple solutions we feel that have to be employed, not just the retraining,” she said.

She wasn’t ready to toss away “broken windows,” but she said officers need to change how they approach quality of life crimes.

“They need approach these low-level crimes with courtesy, professionalism and respect, and with discretion—because low-level crimes, they all don’t need to be followed by an arrest. It could be a summons-able activity, and so we ask them to look into that—and the commissioner said that’s going to be a big part of the retraining,” she said.

Ms. Rose insisted Garner had not been “resisting arrest” during his altercation with cops, though he made it quite clear he did not want to be arrested for the crime police accused him of committing.

“When he was approached, he was not engaged in anything, but they recognized him as someone who had done that in the past,” Ms. Rose said, referring to witnesses who said Garner was not selling cigarettes before his death. “So he was not resisting arrest, he was saying, ‘I am frustrated with this process, enough is enough, and it ends today.’ And then his words turned out to be very prophetic, because his life ended that day.”

“No New Yorker should be the collateral damage of these misguided, zero-tolerance ‘broken windows’ policies that target our communities of color and alienate people from the police,” she said.

“Every time you look at who it is that is affected by those policies, it is dramatically, disproportionately young people of color,” he said. “That is unacceptable in this city.”

But he said even with Mr. Bratton’s history as an engineer of “broken windows” policing, he thought the commissioner was capable of taking on a fair review of it.

“’Broken windows’ is two words in between quotes,” Mr. Lander said when pressed on his feelings on the tactic.

When there’s evidence certain crimes do often lead to bigger ones—like gang activity—they ought to be targeted for enforcement, he said.

“Where there is not good evidence that there is any connection, and on the other hand where there is reason to be concerned that it’s racially discriminatory and has harmful collateral consequences that aren’t about crime-reduction but limit people’s opportunities in ways that are connected to race and neighborhood, then you have to say, ‘That’s not what we should be doing,’” Mr. Lander told the Observer. 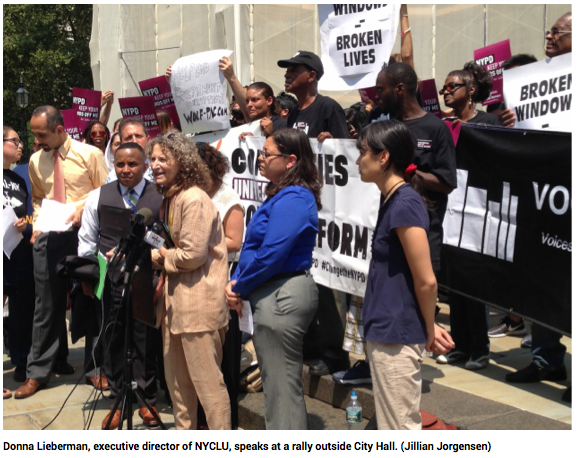