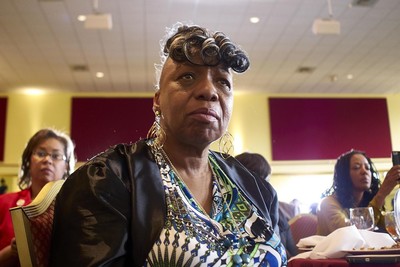 Supporters of the family of a Staten Island man who died when cops used a banned chokehold in his arrest will accuse Mayor de Blasio of misleading the public on the case.

Eric Garner’s mother Gwen Carr, pols and other advocates were slated to appear at City Hall Tuesday to demand that the NYPD immediately begin disciplinary hearings against Officer Daniel Pantaleo and other cops involved in the fatal 2014 encounter.

With a federal investigation into the July 17, 2014, incident apparently in limbo, the NYPD said Monday it would begin the disciplinary process in September.

“Despite nearly four years passing since Garner’s killing, the de Blasio administration and NYPD have done nothing to hold any of the officers accountable,” Communities United for Police Reform said in a statement.

“While they have used the excuse that they are waiting for the Trump administration Justice Department (DOJ) to act on Pantaleo’s case, they have also taken no action against the other officers who used force or lied on initial reports to cover up the use of force.”

The group which monitors discriminatory policing practices in New York said despite de Blasio’s claims to the contrary, local jurisdictions do not have to wait for the feds to finish an investigation before moving forward with their own probes.

They noted that after the NYPD put out its letter, DOJ said it had already told the department last spring there was no reason to delay its own investigation. “Given the DOJ statement, September is indisputably an artificial constraint imposed by the NYPD – something the department has continued to create as a rationale for inaction,” the group said.