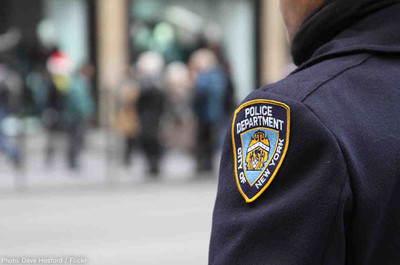 On Tuesday, the New York City Council will vote on two police accountability bills. One represents real reform that will protect New Yorkers' privacy rights when police ask to search them without probable cause. The other is faux reform that is the result of a backroom deal between powerful politicians and the New York Police Department.

For more than five years, the two bills were collectively known as the Right to Know Act. Intro 541-C and Intro 182-D deal with improving communication and transparency during police stops and searches. 541-C, sponsored by Council Member Antonio Reynoso, will require the NYPD to develop a policy that instructs officers to let people know when they have the right to refuse to be searched. And when they conduct a “consensual” search, officers will also have to get video or written proof that an individual consented.

Intro 541-C is real, concrete reform that will improve the quality of policing in New York City and enhance trust and accountability in police-community interactions. The legislation is the result of relentless efforts by police reform advocates, including the New York Civil Liberties Union and grassroots-led coalitions like Communities United for Police Reform (CPR), to develop a Right to Know Act that is truly protective of people’s rights.

The same, however, cannot be said for the latest version of Intro 182-D. Earlier versions of that bill required officers to identify themselves at the start of low-level law enforcement encounters, provide an explanation for why they stopped someone, and offer the person a business card at the end of any encounter that didn’t result in an arrest or summons. This common-sense proposal was a direct response to the experiences of people of color who were subject to repeated, unlawful abuse and harassment by the police during low-level encounters and who were routinely denied the most basic information needed to hold officers accountable: the names of the officers who mistreated them.

The earlier versions would have created a check on the power imbalance that officers have in these types of interactions. It’s easy to understand why a person would feel too intimidated when being confronted by police to ask for their name, especially if an officer is being abusive.

Unfortunately, the latest version of the ID bill has a huge loophole that swallows the original intent of the law. Under prior versions, officers would need to identify themselves in any nonemergency encounter involving investigative questioning. These types of encounters represent the vast majority of police stops. The new version only requires officer identification when a person is “suspected of criminal activity.” The problem is that police don’t need to suspect someone of criminal activity to approach them, disrupt their daily routines, and question or harass them.

There is no systematic accounting for these encounters, so it is impossible to know the full extent to which New Yorkers are subjected to these types of interactions. What we do know — and what our community partners have reported in abundance — are the countless examples of New Yorkers who have been profiled, harassed, and intimidated by police, even when they were never accused of or suspected of criminal wrongdoing. And we do know of countless reports of officers responding to a request for their name and badge number as an affront or challenge to their authority.

This bill is especially disappointing for New York women, who are far more likely to experience these lowest-level encounters in which harassment regularly takes place. The bulk of interactions between officers and women would be exempt from this version of the law. Citywide, 40 percent of young women report being sexually harassed by police. In the current cultural climate, where each day brings new allegations of sexual misconduct by public officials, we cannot ignore the experiences of New Yorkers who identify as women.

The ID bill’s current incarnation is the result of a deal between the legislation’s sponsor, Ritchie Torres, the NYPD, Mayor Bill de Blasio, and Council Speaker Melissa Mark-Viverito. Community groups were completely shut out of the conversation at the last minute. The result is a missed opportunity at genuine progress on a common sense bill that requires very little of the police and could dramatically shift the culture of policing in New York City.