Chokeholds and Police Abuse, Kept From the Public 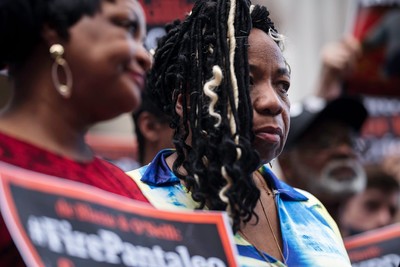 An administrative judge will decide soon whether New York Police Officer Daniel Pantaleo should be fired for using a prohibited chokehold that led to the death of Eric Garner and waves of protestover police brutality five years ago.

Whatever her decision, the public may never know about it.

That is because of the stunning reach of a state law that keeps the personnel and disciplinary files of the police, firefighters and corrections officers secret unless a judge orders them released. New York and Delaware are the only states that so explicitly bar the disclosure of such police records.

The law, Section 50-a of the State Civil Rights Law, was passed in 1976 to make it harder for defense lawyers to use unsubstantiated accusations of abuse or misconduct to undermine the credibility of an officer testifying in a trial. But courts have held that the law also keeps secret substantiated accusations against public servants, even those that lead to discipline.

The law’s main sponsor in the State Senate, Frank Padavan of Queens, who died last year, said three years ago that it was never meant to prevent the disclosure of police misconduct. Yet that is exactly what it has done, blocking the release of crucial information about law enforcement officials who abuse the public trust.

Police and corrections unions argue the law is a matter of safety, protecting officers from retaliation, even though New York’s Freedom of Information Law already allows government agencies broad discretion to block the release of personal information like home addresses that could endanger an officer. A report this year by two former United States attorneys and a federal judge appointed by New York Police Commissioner James O’Neill to investigate police discipline noted that there was no increase in threats against officers or their families reported after an advocacy group posted nearly a quarter-million Chicago police disciplinary records online several years ago.

Mayor Bill de Blasio has said that rather than the law being simply repealed, it should be changed to allow the release of final findings of police disciplinary proceedings, disciplinary recommendations the Civilian Complaint Review Board makes to the Police Department in cases it investigates, as well as body camera footage.

That’s not enough, and Officer Pantaleo’s case shows why full repeal is necessary.

The only reason the circumstances of Mr. Garner’s death are widely known is that someone with a cellphone recorded a video of the police taking him down after trying to charge him with selling cigarettes illegally. After a grand jury declined to indict the officer, the case went into limbo. The federal Justice Department mulled civil rights charges that never came. The Police Department waited nearly five years to begin disciplinary proceedings and did so only after the Civilian Complaint Review Board brought charges. Mr. Pantaleo’s previous disciplinary record — the Review Board had substantiated four allegations of abuse against him — is known only because someone leaked the files. This ordeal would not have been transparent if only final disciplinary determinations had been released.

Mr. Garner died just weeks before a police officer in Ferguson, Mo., shot and killed Michael Brown, which set off a national movement for accountability and transparency by the police over the questionable use of violence against black men like Mr. Garner. Cellphone videos recorded the police killing a Cleveland boy with a toy gun, an Ohio shopper with a BB gun, a Minnesota drivercooperating with an officer on a traffic stop and a South Carolina man who was shot in the back while running away.

Meanwhile, the Pantaleo case dragged on. Other high-profile New York cases have shown the problems with the law. When Officer James Frascatore tackled the retired tennis star James Blake in 2015 in a case of mistaken identity, his light punishment — he lost five vacation days — was known to the public only after it was leaked to The Daily News.

For years, efforts to overturn 50-a have gone nowhere. Its repeal was on the list of criminal justice reforms that Democrats were expected to pursue after retaking the State Senate in last year’s elections. Yet, with the legislative session nearing its end next Wednesday, it appears that lawmakers may not have the appetite for another fight, after winning passage of bail reform and new rules forcing prosecutors to turn over evidence more quickly.

Legislative leaders and Gov. Andrew Cuomo haven’t made repealing or amending the law a priority. Mr. de Blasio doesn’t appear to have lobbied the Legislature seriously for even his limited proposal.

As hope for the law’s repeal has withered in recent weeks, Eric Garner’s mother, Gwen Carr, got more bitter news as she attended the New York Police Department disciplinary trial of Officer Pantaleo in her son’s death. The official who oversaw the department’s investigation of her son’s death testified last month that he had recommended departmental charges against Mr. Pantaleo in 2015, but none were ever filed.

Instead, the Civilian Complaint Review Board, a semi-independent agency that investigates police misconduct, brought the charges of reckless use of a chokehold and intentionally restricting breathing that are being considered against Officer Pantaleo. If the judge in the case finds him guilty, it will be up to Commissioner O’Neill to decide whether to fire him.