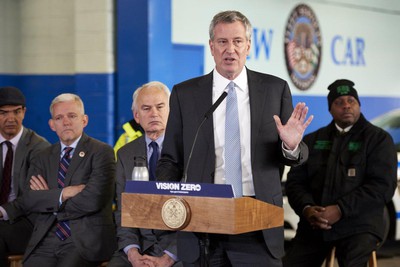 The mayor hastily added a hearing for a controversial police reform bill to his schedule Monday — at a time when many of the activists opposed to it were mourning Erica Garner.

Mayor de Blasio added the Right to Know Act to a slew of other, less contentious, bills getting hearings Monday — slipping the bills into an updated advisory he issued two hours before the event was to begin. Meanwhile, a funeral was being held for Garner, whose father Eric Garner was killed as a police officer used a chokehold while trying to arrest him on Staten Island in 2014.

“I am disappointed that the mayor’s office only confirmed that these bills would be on this agenda at the last minute,” Carolyn Martinez-Class, a spokeswoman for Communities United for Police Reform, testified at City Hall. “The fact that it is also occurring at nearly the same time as Erica Garner’s funeral — who was a staunch advocate for police reform and the real Right to Know Act — is disappointing and disrespectful.”

Advocates are opposed to the act’s two bills. Authored by Councilman Ritchie Torres, it would require cops to identify themselves with a business card during stops. Following negotiations with the NYPD, the bill won’t apply to low-level or traffic stops, turning advocates against the legislation. Martinez-Class testified that the bill had “completely removed the most essential protections of the original legislation.”

Leo Ferguson of Jews for Racial and Economic Justice said the bill was “not compromise but is a real step backward for police reform” and called it “deeply dangerous.”

He said New Yorkers will believe they are always entitled to an officer’s identity and the reason for the stop — but in thousands of stops that won’t be true, and he argued interactions could escalate if people being stopped asked for identification and an officer believes the person is questioning his authority.

Both Martinez-Class and Ferguson express support for a second bill, sponsored by Councilman Antonio Reynoso, requiring cops to tell people they have a right to refuse to be searched when there's no legal basis to force one, and has been met with support from advocates. They were the only advocates to testify on the legislation.

“I don’t make it a habit after testimony to affirm or disagree on any specific point,” de Blasio said. “Obviously I disagree with some of the last pieces of testimony but respect the folks who came to testify.”

A spokesman for de Blasio said the hearing had been noticed in newspapers and the City Record more than a week ago, which is required by law. But he didn’t explain why those two bills were missing from the original public schedule sent out Sunday evening.

“These hearings were noticed more than a week ago and added to the public schedule hours before they took place, leaving time for members of the public to attend-which they did,” Austin Finan said.