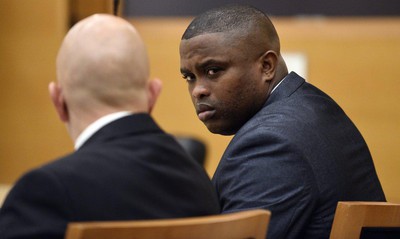 A Brooklyn teen broke down crying Thursday while describing the horrifying scene after an off-duty NYPD cop opened fire on her stepdad in a lethal road rage attack.

The sound of her own voice on a 911 call left 15-year-old Zaniah Isaacs in tears in the murder trial of Wayne Isaacs, who was headed home from the 79th Precinct on the Fourth of July last year.

“I saw the gun in (Isaacs’) hand,” the teen testified in the Brooklyn courtroom. “I saw my stepfather on all fours on his back, like crawling. The man got out of the car and walked to the back of his car and that was it.”

Prior testimony from the girl’s mother, Zaquanna Albert, indicated Isaacs gunned down Delrawn Small after the cop cut off their car on Atlantic Ave. in East New York.

Zaniah — no relation to the police officer — recalled lying her head on her infant brother’s car seat as the family drove home from a barbecue on the night of the killing.

A sharp zig-zag by the white Kia sedan driven by Small rattled the teen around in the back seat, apparently after Isaacs zipped in front of their vehicle before the confrontation.

When they reached a red light, Small took off his seatbelt to exit the car.

“My mom said, ‘Don't get out, the kids are in the car,’” recalled Zaniah, an aspiring lawyer. “My stepfather got out, crossed in front of the car and walked towards the corner when I heard three gunshots.”

The driver in the other vehicle, after firing his service-issued gun, held his right hand and arm out the car window, the tenth-grade student testified.

Assistant Attorney General Jose Nieves then played the teenager's frantic 12:04 a.m. call to 911 for the jurors.