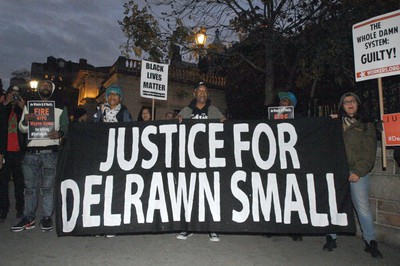 With NYPD officers looking on, more than 100 people gathered on a Manhattan street corner to protest the acquittal of a cop cleared in the road rage shooting death of a Brooklyn father.

Demonstrators in Union Square said a jury put Officer Wayne Isaacs above the law when they failed to hold him responsible for the July 4, 2016 slaying of motorist Delrawn Small, who was killed in East New York after a clash with the off-duty officer.

“Here we stand again,” said Gwen Carr, whose son, Eric Garner died during a 2014 Staten Island arrest after a cop used a banned choke hold. “This has to be stopped. Now we stand here mourning Delrawn Small. Now we see the murder of Delrawn Small and he was unarmed. Police should have to abide by the same laws we do.”