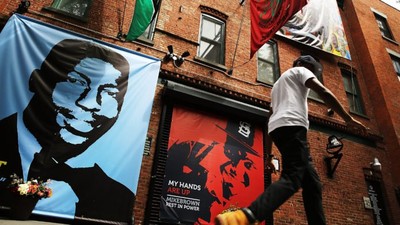 Holidays like Father’s Day are hard for those who’ve lost a patriarch, especially when the loss is due to a violent death at the hands of the police.

Monday, the families of Eric Garner, Delrawn Small and Saheed Vassell, called for the New York City Mayor Bill de Blasio and the NYPD to take action against the police officers involved in the deaths of those three fathers. Relatives gathered on the steps of City Hall to ask for accountability and transparency from Mayor de Blasio and City Hall in the investigations of the police officers accused of killing their loved ones.

"As you know, my granddaughter Erica, she passed away last year, two days before New Year’s,” said Gwen Carr, Garner’s mother. “And this was without seeing justice for her father.”

Garner’s family is still waiting for the department to take action against officer Daniel Pantaleo, who remains an NYPD officer on desk duty.

Mayor De Blasio has said he is waiting for the result of a federal civil rights investigation, before taking any disciplinary action, but activists have argued he does not need to wait on that to take internal disciplinary action.

“We are approaching four years to mark Eric’s death and the NYPD is still covering these officers who killed my son. The officers are still getting pay raises,” Carr said. “Officer Pantaleo has gotten a $20,000 pay raise since the day that he killed my son. So it seems like the de Blasio administration is giving raises for them killing my son.”