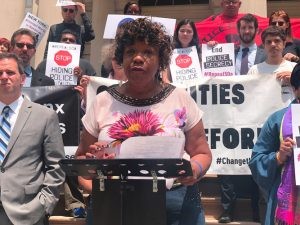 Elected officials, civil rights advocates and relatives of those killed by police officers gathered at City Hall to call for the repeal of a state law they say is obscuring police transparency and protecting bad cops.

The law, known as Section 50-a, is a provision of the state’s civil rights law that shields the personnel records of law enforcement officers from public disclosure.

At a June 8 press conference, advocates noted that New York is one of only three states with a law restricting public access to details on police officers’ personnel records, and that 12 states routinely make disciplinary records available to the public.

“New York State government must repeal 50-a, because it impedes police transparency and accountability, undermines community safety, and harms public trust in government,” said Monifa Bandele, a spokesperson for Communities United for Police Reform, which addresses discriminatory policing in New York. “It allows police departments, like the NYPD, to misuse it for their own purposes of hiding police misconduct and a lack of accountability from the public.”

“There are plenty of other jurisdictions where this information is available, even online,” said Cynthia Conti-Cook, Staff Attorney with the Criminal Special Litigation Unit at The Legal Aid Society. “It’s not just about bad apples, it’s about bad barrels.”

Advocates were critical of what they said were shifting interpretations of the statute by the de Blasio administration, pointing out that the city appealed to a higher court after a state judge ruled in 2015 that misconduct information regarding Officer Daniel Pantaleo, the NYPD officer who placed Eric Garner in a fatal chokehold, could be released.

They also noted that the NYPD reversed the longtime practice of posting the outcomes of disciplinary cases outside of its press office, claiming it was in violation of 50-a, and has also asserted that video footage of alleged misconduct could only be released due to an officer waiving those protections.

In addition, an investigation by BuzzFeed News revealed that more than 300 NYPD workers had committed offenses serious enough to merit firing from 2011 to 2015 but still kept their jobs.

“There’s been a lot of positive forward movement policing this city under this administration. It’s disappointing that two areas where that hasn’t been is transparency and accountability,” said City Councilmember Jumaane Williams. “50-a and this administration’s interpretation of it is just a huge problem. It’s a very frustrating thing.”

“The thought that they have these officers who have done these egregious acts patrolling the streets again, back on duty, is disgusting,” Davis stated.

Gwen Carr, Garner’s mother, said that Pantaleo was the subject of two civil rights lawsuits related to false arrests prior to the fatal incident with her son.

“We wouldn’t even know about Pantaleo if the CCRB hadn’t leaked his record,” she said, referring to the NYC Civilian Complaint Review Board. “We must Fire Pantaleo and Repeal 50-a.

For his part, de Blasio has said he intends to push for reform of 50-a. During an appearance on WNYC Radio, he remarked that reform of the law was something “we are going to fight for intensely.”

“Obviously with appropriate confidentiality respected, but to show to everyone that there are consequences for any wrongdoing,” de Blasio said.

The union representing police officers has criticized the push to repeal 50-a.

“Unlimited public disclosure of police officers’ confidential personnel records would put them and their families at greater risk for harassment, or worse,” said Patrolmen’s Benevolent Association (PBA) president Patrick Lynch in a statement. “It would also allow criminals to escape justice by turning their trials into circuses that have little to do with their own guilt or innocence. The state legislature foresaw all of these dangers when it placed common-sense limits on the release of these records. Nothing has changed to negate the need for these laws.”

Conti-Cook noted that the PBA is suing the city to prevent the release of body camera footage, claiming it should be precluded by 50-a.

“I think we should all keep an eye on the PBA’s lawsuit,” said Conti-Cook. “It will really inform us more about whether the [Police] Department is prohibited versus allowed to voluntarily decide to release [footage].”

She called on the city to become more vocal regarding its stance on the law. “The mayor could speak about it more forcefully. The City Council could pass a resolution,” she said.

State Assemblymember Dan Quart, who attended the rally, has co-sponsored state legislation that would repeal 50-a, but said the bill has been stalled since January.

“It’s frustrating because no issue is as clear-cut as this one is,” said Quart.

Williams remarked that between Cuomo and de Blasio, one of them should advocate more strongly for repeal of the law.