Knowing Our Rights, Keeping Each Other Safe

Will Depoo
The West Indian
View the original piece 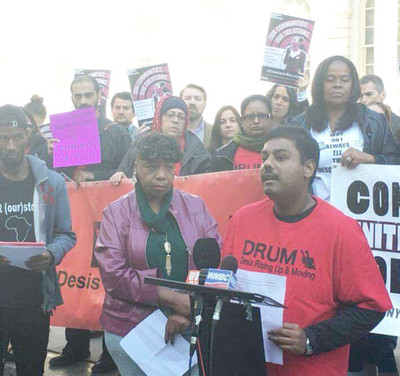 On October 19th, the Right to Know Act (RTKA) was implemented as New York City law. This is a huge win for New Yorkers, especially the most impacted community members – those who are working class, undocumented, and face regular police abuse.

South Queens has number of different communities, including South Asians, Indo-Caribbeans, African Americans, Afro-Caribbeans, and Latino. South Queens is home to the largest Indo-Caribbean community in New York City, many of whom are working class and are impacted by immigration. While the racially-targeted stop-and-frisk policing strategy has ended, South Queens residents still face disproportionately more stops than other areas of New York City.

In 2016, the 106th precinct, which covers the residential neighborhoods of Ozone Park and South Ozone Park, stopped 1,264 community members in 2016. In comparison, the 6th precinct which covers majority white Manhattan neighborhoods of Greenwich Village and the West Village, only had 37 stops that same year. According to a report published by Community Service Society this year, the 106th precinct was home to 1.6 percent of the city population in 2016, but more than 10 percent of all stops citywide. (“The enduring discriminatory of stop and frisk” http://www.cssny.org/news/entry/stop-and-frisk)
This data shows being stopped by the NYPD impacts a lot of South Queens community members.

The Right to Know Act gives power back to the community, and holds the police accountable. Officers can get access to all our information – our ID, address, etc . – yet often times we don’t even know the name of the officer. These interactions are not based on equality. The Right to Know Act helps to allow a balance of equality between the community and police. It aims to prevent unnecessary police encounters, and requires the police to be more transparent when stopping people. As Poonam, a youth leader at DRUM – Desis Rising Up & Moving and resident of Richmond Hill from Suriname says, “The Right to Know Act is important to the Indo-Caribbean community because it brings community safety and protection into the hands of the people who live in their neighborhoods instead of facing harassment and abusive police interactions.”

The Right to Know Act consists of two laws.The first is a consent to search law, which states that when an NYPD officer has no legal justification to search you, your vehicle, or your home, they are required to ask for your consent and to let you know you can refuse the search. The consent to search law was supported by over a hundred community organizations throughout New York City.

The second law requires an NYPD officer to give you a business card without you asking for it. The card has the officer’s name, rank, badge number, and their command. This law is an NYPD-compromised law that was not supported by community organizations and many City Council members. Therefore it has limitations when you can obtain a business card when stopped by an officer. Those stops include when they suspect your are involved in criminal activity, if they frisk or search you, most roadblocks and checkpoint stops, and if you are being questioned as a survivor or as a witness to a crime. In all other interactions, including if an officer stops you on the street and starts questioning you, they don’t have to offer a card to you, but they are required to provide one if you ask for it.

A major gap in both laws is the NYPD made the changes to their patrol guide without any community input, which was required by the laws. This means some of the most vulnerable in our communities will continue facing police harassment. For example, the NYPD has not updated the patrol guide requiring officers to use the language line service when stopping a New Yorker in which English is not their first language. This is a huge gap that impacts many immigrant communities because an officer may not actually receive consent to search a person that doesn’t speak English.

The Right to Know Act would not have been possible without the work of grassroots community organizations such as DRUM – Desis Rising Up & Moving. DRUM is a membership-led organization of working class Indo-Caribbean and South Asian community members living throughout NYC. DRUM is the only Indo-Caribbean/South Asian organization that worked with Communities United for Police Reform (CPR), a coalition of over 100 community organizations in NYC, to get these laws passed. Since 2012, DRUM and CPR worked to get them passed, having impacted community members share their experiences with abusive policing, hold elected officials accountable through phone banking and speaking out at rallies, and lead the campaign.

Everyone in our community, but especially the most impacted, need to know what their rights are when interacting with the NYPD and other law enforcement agencies, such as Immigration and Customs Enforcement (ICE). DRUM is holding a Know Your Rights training on Saturday, November 17th from 1-3pm in Richmond Hill (121-18 Liberty Ave.) for community members to learn what to do if the police or ICE agents knock on your door, come to your workplace, or stop you on the street. The only way we can keep each other and our community safe is by knowing what our rights are. “Knowledge is power; honing in our knowledge of our rights is extremely powerful” says DRUM member Abdul, a resident of Kew Gardens from Pakistan. Last year, DRUM member Ryan, a long-time resident of South Richmond Hill from Guyana and a father of 5, was picked up in front of his home by ICE with the help of the NYPD; he spent 6 months in ICE detention. He says “if I knew my rights then, I would have known what to do when I saw ICE, and probably would not have been picked up that day.”