Mayor: New police training procedures in wake of Eric Garner's death 'will have a huge impact'

CITY HALL -- Staten Island officials and clergy joined Mayor Bill de Blasio, Police Commissioner William Bratton, activist the Rev. Al Sharpton and top city officials in the City Hall Blue Room on Thursday for a roundtable summit to talk about police and community relations in the wake of the death of Eric Garner in police custody.

But Rev. Sharpton said that the city needed to move beyond NYPD re-training in dealing with situations like Garner's.

He said increased training wasn't necessary to let police know what to do "when a man says 11 times 'I can't breathe.'"

He said that de Blasio had won City Hall by pledging to reform police practices, such as stop-and-frisk, and by saying he would improve NYPD relations with community members.

He challenged de Blasio to follow through and become that "transformative mayor" and said that de Blasio's son, but for his father, would "be a candidate for a chokehold."

He said he hoped real results would come out of the summit and other city efforts.

"If you're just going to play the spin game, I'm going to be your worst enemy," Rev. Sharpton said.

He also said that it was wrong to assume that race wasn't involved in the Garner incident until the investigation is completed.

He said the only way to make police stop using "illegal chokeholds" was to "perp walk one of them that did."

Bratton said the NYPD was looking to create an "opportunity" out of the Garner "tragedy." He said he wanted the department to "take the opportunity to learn from it and move forward."

He said he "disagreed in some respects" with Rev. Sharpton's comments about training, saying that retraining the NYPD would be the "absolute catalyst" to improving police and community relations.

Bratton said that the NYPD in years past had been "deficient in training," and that he meant to correct that. He said that police had a wide range of discretion when dealing with enforcement situations, including everything from telling people to "move along" to issuing summonses or making arrests."

Both Bratton and de Blasio said that public safety was a two-way street, and that both hoped to foster mutual respect between police and New Yorkers.

Ms. Rose (D-North Shore) said the point of the summit was "how to prevent future tragedies."

She said officials had promised an expedited investigation and "they have done that." 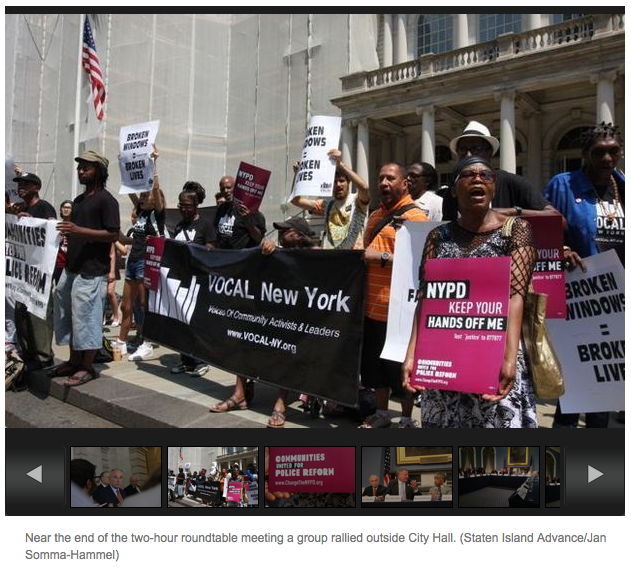