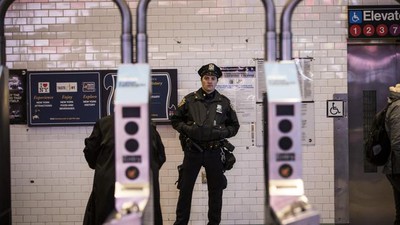 Police reform in America’s largest city has taken a strange turn in 2017.

Although the decades-old tug of war between New York’s mayor, cops, and activists remains, aggressive calls for change do not seem to be dominating the public conversation like they once did. Maybe it’s a symptom of uncertainty under President Donald Trump—a New Yorker with an unhinged law-and-order credo and overwhelmingly pro-cop mindset who's remaking the federal government in his image. That includes the installation of an old-school Drug Warrior who hates the idea of reining in cops, Jeff Sessions, at the Justice Department. Meanwhile, the bevy of national outrages since Trump’s inauguration—over everything from immigration to refugees to attacks on the LGBTQ community to the new tax law—may leave local activists with less fuel to feed the fire of rage at NYPD brutality and misconduct. (Not that there haven’t been been a decent handful of instances where anger boiled over into more public view anyway.)

Or maybe the climate feels less tense because major crimes in the city continue to drop amid piecemeal reforms, and alongside them, the use of the notorious practice of stop-and-frisk, which ignited much of the most intense reform-minded political energy in the first place.

But even as momentum for criminal justice reform has faded nationally and lost some of its luster at the local level, New York politicians are still trying to change the game. Look no further than the passage this week by the City Council of two bills that, together, are often called the “Right to Know Act.” The changes have been years in the making, and could change how everyday interactions between cops and regular people play out for decades to come. The bills—which Mayor de Blasio is expected to sign—show the potential for change in the criminal justice system at the local level under Trump, but also the stagnation of that debate as activists engage in rearguard actions nationwide.

Assuming de Blasio signs the bills, at the end of any non-traffic stop that doesn't end with arrest or the issuance of a summons, NYPD officers will have to present you with a business card that includes their name, rank, command, and the phone number for the Civilian Complaint Review Board, an oversight body. They will also generally have to explain their reason for stopping you. For searches in which consent is required by law, officers will actually have to explicitly offer you the right to refuse it.

“Today, the Council will be passing legislation to increase transparency and accountability at the NYPD, while also allowing the NYPD to do their jobs keeping New York City safe,” Bronx Councilman Ritchie Torres, author of the “identification” bill, known as Intro-182, said Tuesday.

When Right to Know was first floated a few years back, advocates pointed out that its provisions were in line with the recommendations of President Barack Obama’s Task Force on 21st Century Policing, and similar policies were required in a number of consent degrees the Obama Justice Department imposed on cops in cities like New Orleans and Puerto Rico.

But under the Trump administration, that task force’s findings have been all but abandoned, with Attorney General Jeff Sessions showing little enthusiasm for—and in some cases actively working to dismantle—reforms that seemed unstoppable under his predecessor.

Increasingly, this has left states and municipalities like New York to act independently of Washington. And even in the city, Right to Know did not emerge without controversy—these were some of the closest Council votes of the last four years, thanks in part to resentment from some progressives who thought the final bills didn’t go far enough.

In fact, a number of advocates and council members who originally pushed Right to Know came out against Torres’s “identification” bill, arguing that it included too many loopholes, ostensibly intended to placate cops and the mayor. They pointed to the fact that, under this bill, cops are not compelled to identify themselves during regular car stops and other low-level infractions which are at the heart of the “broken windows” school of policing, especially as felt by communities of color.

“This version of the bill eliminates the most essential protections for New Yorkers in the majority of policing interactions, and has been advanced with only the support of those who obstructed it for the past four years,” Monifa Bandele, a spokeswoman for Communities United for Police Reform, said in a statement. “It isn’t sweeping, it isn’t reform and it isn’t progress – it’s a step backwards for New York City that will undermine police accountability.”

Police groups aren’t happy either, though they’ve (predictably) made the opposite case—that these changes wouldn’t protect officers in the line of duty. When Right to Know was first taken up in 2015, then-Commissioner William J. Bratton suggested it would falsely signal to citizens that they did not have to respond to—or cooperate with—police. After it passed earlier this week, Patrick Lynch, the notoriously fiery head of the Patrolmen’s Benevolent Association (PBA), the city’s largest police union, decried the new restrictions on his members.

“The PBA had zero input on the revisions to this legislation, and if the Council really didn’t want to discourage officers from exercising discretion and policing proactively, they would have abandoned these misguided bills altogether,” he said in a statement. “But instead, they have continuously piled on new burdens and second–guessing for our police officers, presenting a dangerous distraction that will place New Yorkers in harm’s way.”

Though he eventually compromised with the Council, Mayor Bill de Blasio, too, was hesitant to get on board. He repeatedly referred to the precipitous decline in stops in recent years as a sign of progress, and reiterated that tweaks baked into internal NYPD policy under his tenure were significant in their own right. As it stands, police officers in New York have previously had to give out receipts to citizens after a stop that doesn’t end in an arrest, or summons, receipts that are supposed to include much of the information required by the new bills.

Experts on policing in the city offered some context for why the collective reaction has been a kind of “meh,” where reformers aren’t thrilled, and cops aren’t exactly in open revolt, either.

“The truth is that legal and procedural structures will always take a back seat to officer and citizen safety,” Eugene O’Donnell, a lecturer at John Jay College of Criminal Justice and former NYPD officer and Brooklyn prosecutor, told VICE. “If an officer has cause to believe someone has a gun, they will act emphatically, and deal with the legalisms later. It’s not clear a local law can invalidate an otherwise valid search, so I don’t know what the remedy is if the cops disregard this provision.”

It is unusual, he noted, for a local legislature to do something like this—it is typically left to states or police departments to grant more rights to suspects, like reading of their Miranda Rights or the taping of interviews. But the Right to Know Act, O’Donnell pointed out, was crafted a few years ago, when stops were much higher than they are today. He dubbed it “simply cosmetic” in the current political moment.

“If crime patterns were a concern or violent crime was rising, the Council might not have acted,” O’Donnell told me. “But in a super safe city, they must feel, why not?”