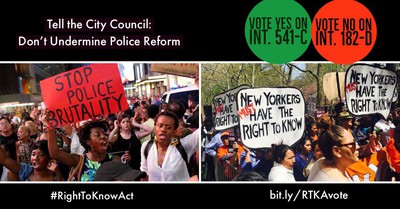 Last week, New York City government took a step forward and also a step backwards on police accountability. The half of the Right to Know Act sponsored by Council Member Antonio Reynoso (Intro 541-C) remains in an effective form that will help protect New Yorkers from unconstitutional searches. It is a testament to his strong leadership and skilled legislative negotiating, and should be passed by the City Council.

Unfortunately, Council Member Ritchie Torres, who sponsored the other half of the legislative package, allowed Intro 182 to be gutted by the NYPD, misled advocates about his intentions to advance it, and is now seeking to pass a bill that no longer resembles police reform. While his misleading actions deserve scrutiny, it is the lack of substantive protections in this new version that explains why the bill has no support from the 200+ group coalition that gave him the bill in the first place. It’s also why we are going even further to oppose it and New Yorkers should join us by telling their Council members to vote ‘No’ on Intro 182-D.

This version of Intro 182 has removed the core protections of the legislation and allowed loopholes that ensure it will provide no change for New Yorkers in their abusive policing interactions. In fact, the bill as written is dangerous and may increase the likelihood of escalation and even violence in the majority of low-level encounters where New Yorkers most frequently experience abuse. That is not progress for people in this city who need it and have been demanding it, and the City Council should not attempt to convince themselves otherwise.

No one ever expected a “perfect bill” and we clearly understand the give-and-take necessary to pass laws. We worked through that process with Council Member Reynoso on Intro 541 and previously on the historic Community Safety Act in 2013 with Council Members Jumaane Williams and Brad Lander. However, the fundamental objectives for crafting Intro 182 – improving transparency and protecting New Yorkers in the most common policing encounters that are abusive and lack transparency – are no longer represented in this version of the bill that Council Member Torres is advancing. Passing Intro 182-D would be an exercise in imagery over substance, and we cannot and will not sell out our communities and protections for an empty legislative “victory” that fails to deliver change on the ground. That would be easy, but scoring legislative “wins” for the sake of our own political power is not why we do this work.

We are focused on achieving lasting change for New Yorkers through police accountability that ends abusive, discriminatory policing. City Council members, who have stood with us before and on these bills to this point, should remain committed to this same central principle and demonstrate leadership by voting against Intro 182-D. This version of the bill would only undermine police accountability in New York City and be a lasting stain on this City Council.

These two pieces of legislation were crafted by community members based on the specific and common experiences people were having during encounters with officers, in particular low-level interactions unrelated to criminal suspicion. These are among the least transparent interactions, because there is no reporting or recording of them by the police department and can often be initiated for highly arbitrary or discriminatory reasons. The reforms are based on decades of occurrences, where people are left feeling unsafe during and after policing encounters because of this lack of transparency and abuses that occur during them. This version of Intro 182 leaves this status quo intact.

These low-level investigatory encounters and traffic stops account for the vast majority of abusive interactions that the initial bill was aimed at addressing, and the current version entirely eliminates these categories. The low-level investigatory encounters, where an officer approaches a civilian without criminal suspicion and requests identification or reasons for the person’s presence in a public space, will remain lacking in transparency. The officer will still not have to identify or explain themselves and these unsettling interactions that young people, immigrants, LGBT people, New Yorkers of color and so many others experience all the time will continue without protections and transparency.

Despite traffic stops being some of the most abusive and least transparent encounters, those protections were also taken out of the bill. The well-documented extreme escalations during these stops, like the killing of Philando Castile, and countless other examples of abuse – like racial and other discriminatory profiling, anti-LGBT abuse and sexual harassment/abuse – make it shocking that this category of encounters could be entirely eliminated.

The loophole that removes protections for crime victims and witnesses, just weeks after NYPD officers reportedly intimidated a Brooklyn 18-year-old who was raped by their NYPD colleagues, is also shockingly inexplicable.

The final nail in the coffin is that this version contains a loophole so broad that it has gutted half of the bill’s purpose by swallowing the rule requiring officers to explain the reasons for any interactions. Despite the bill originating from New Yorkers not knowing why officers were stopping or harassing them in their communities, outside homes, or even inside their own apartment buildings, this new version of the bill ensures that officers will never have to provide an explanation for any encounters.

Intro 182-D is not a compromise bill and it does not represent progress – it’s an NYPD attempt to undermine an effort to advance police accountability and transparency. It will be counterproductive, giving only the political illusion that transparency has been progressed, when in reality, hundreds of thousands, if not millions of low-level non-emergency policing encounters will be left shrouded in secrecy. The lack of transparency in these hundreds of thousands of encounters will leave the public, advocates and elected officials with no substantive case to make about the need to return to this issue, as those encounters are not recorded or reported (like reasonable suspicion stops) – they basically do not exist in record. This will make it nearly impossible to return to the glaring problems with this legislation and undo them, as political will on the issue also disappears. The City Council should vote against Intro 182-D and in support of Intro 541-C.