NYPD cop had no 'justification' for shooting Small: prosecutor 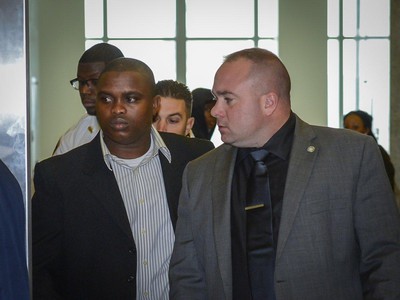 An NYPD cop carried out a “brutal and deliberate act” in gunning down a Brooklyn motorist in a deadly road rage confrontation, a prosecutor said Tuesday.

Officer Wayne Isaacs, 37, has been charged with second-degree murder in the killing of Delrawn Small, also 37, in a July 4 roadside showdown in East New York.

“The defendant fired, not one, not two, but three shots were fired from a semi-automatic as the victim approached with no weapon,” Assistant Attorney General Joshua Gradinger said at Isaacs’ arraignment in Brooklyn Criminal Court.

“The defendant had no legal justification. The strength of this case is overwhelming.”

Court papers obtained by the Daily News show that Isaacs initially downplayed the shooting on Atlantic Ave. near Bradford St.

“I was involved in an off-duty incident,” he told a fellow officer after the midnight shooting.

Isaacs, speaking to a second officer, insisted that he was a victim.

“He kept hitting me. My lip, my lip,” the officer said.

Prior to the hearing, Small’s widow Wenona Houser Small said she was bracing herself to lay eyes on her husband’s killer for the first time. (ANTHONY DELMUNDO/NEW YORK DAILY NEWS)

“I was attacked,” he said to a second paramedic. “I was hit.”

A surveillance video appears to tell a different story.

Small, who was two cars behind Isaacs on Atlantic Ave., is seen exiting his vehicle after both had stopped at a red light.

Just a few seconds after Small reached Isaacs’ driver side window, the victim is seen collapsing to the ground, shot three times in his arm, chest and abdomen.

At the arraignment, Isaacs’ lawyer Stephen Worth argued that the video proves his client’s innocence.

Isaacs, 37, has been charged with second-degree murder in the killing of Delrawn Small. (JESSE WARD)

“We will use the same video to point to his innocence,” Worth said. “The deceased approached, he wasn't coming over to give a good salutation.”

Worth, in fighting prosecutors’ request for a $500,000 bail and ankle monitoring, noted that Isaacs has a wife and two kids.

Isaacs was also ordered to wear an ankle bracelet and surrender his passport and firearms.

“We conducted a thorough investigation, and as I said time and again, we followed the facts wherever they lead,” Schneiderman said Tuesday.

Prior to the hearing, Small’s widow said she was bracing herself to lay eyes on her husband’s killer for the first time.

"It's going to be painful, excruciating,” Wenona Hauser Small said. “I just want to see justice."