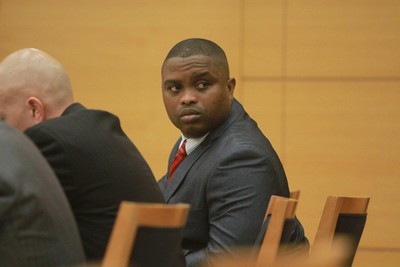 An off-duty NYPD officer who gunned down a Brooklyn father in what he claims was self-defense during a road rage encounter did not have any visible injuries to his face, according to trial testimony Friday.

Officer Wayne Isaacs told detectives and a 911 operator on July 4, 2016, that he shot Delrawn Small three times after he was punched in the face while at a red light on the corner of Atlantic Ave. and Bradford St. in East New York.

Isaacs, who was driving home about midnight after his shift at the 79th Precinct, had cut off Small’s car.

Retired Det. Vincent Falsitta, who had gone to Jamaica Hospital after the deadly shooting to document the facial injuries Isaacs reported, was asked Friday by Assistant Attorney General Joshua Gradinger whether he noticed any injuries.

“I did not see anything,” Falsitta replied.

Isaacs is facing 25 years to life in prison for second-degree murder charges.