NYPD Watchdog: Too Many Cops Are Preventing The Public From Filming Them 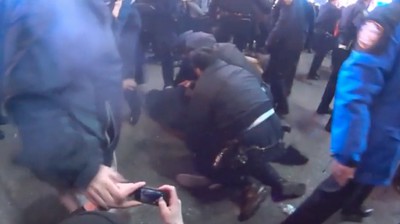 Only eight officers were disciplined during that three-year span, with “command discipline” — a loss of up to ten vacation days — representing the harshest penalty. The majority of officers faced only formal training.

Officers were determined to have interfered with filming by threatening or actually carrying out arrests; by physically blocking filming with bodies, hats, hands, or other objects; by shining flashlights into a lens to block filming; by snatching phones or knocking them out of users’ hands; and by tampering with or erasing footage after it was shot. The majority of complainants, 58 percent, were people filming their own interactions with officers, and the remainder were bystanders. Of the total number of complaints received, the agency “substantiated” — or judged to have likely happened — 28 percent.

The report describes incidents without naming individual officers, but notes that one officer was accused of destroying cell phones at least five times. In one substantiated 2014 complaint described anonymously in the report, that officer was accused of grabbing a cell phone out of the complainant’s hand, throwing it on the ground, and “stomping” on it, destroying the device. A year later, the same officer allegedly pulled a civilian “to the ground” to prevent him recording. The officer had three other similar complaints lodged against him prior to those two incidents.

Among the more egregious incidents detailed in the report:

Police were conducting a street stop when a bystander began filming them. They arrested the bystander, and charged him with obstructing governmental administration, disorderly conduct, and resisting arrest. (All charges were later dropped.) Surveillance footage then showed them throwing the bystander’s phone out of their car window as they drove from the scene.

In one 2014 incident, an officer used her asp (a type of baton) to knock a phone out of a bystander’s hand, seized the phone, and then continued to assault the bystander. The allegations were corroborated by two independent witnesses.
In two cases, officers conducting an arrest shone a bright light at a camera operator for more than three minutes at a time, in an attempt to block the recording.

When a bystander attempted to record the license plate number of a patrol car, the officer in the car “drove [the officer’s] vehicle toward the civilian and stopped within inches of his body before driving away.” The board determined that it was an attempt to intimidate the civilian with a threat of force.

A man was recording a police stop of a neighbor for riding a bike on the sidewalk. As he was filming, a patrol car pulled up and an officer emerged who “immediately” took the cell phone from the civilian’s hand. A nearby surveillance camera then captured the officer manually deleting “all data” on the civilian’s cell phone.

An officer was found to have tampered with footage, and later claimed he had snatched a cell phone from a bystander “in order to confirm that it was not a cell phone capable of firing bullets.”

The CCRB investigates complaints and makes recommendations for punishment when it finds wrongdoing, but the NYPD commissioner has the power to downgrade CCRB’s punishments or ignore its recommendations entirely. In the eight cases where charges were recommended by CCRB, the commissioner — most of the cases would have been closed under former commissioner Bill Bratton — decided not to impose any penalty in one case, and downgraded others. The report doesn’t describe what punishments, if any, officers in the above cases received, and CCRB staff said they couldn’t elaborate for privacy reasons. A controversial provision of state law prevents the release of virtually any information about police officer discipline.

Allegations of police interfering with filming are common, and the issue has been widely litigated. Generally speaking, anyone can record police activity conducted in public, as long as they don’t obstruct police activities.

CCRB’s report includes a number of recommendations, including some aimed at improving its own investigations. It’s only since March of 2015 that CCRB included interference-related allegations as one of the charges that can be made against an officer, and the agency found 38 cases that included allegations of interference that the agency never pursued.

Communities United for Police Reform, a criminal justice advocacy group, released a statement that said the report underscored a continuing problem under the administration of Mayor Bill de Blasio.

“This report shows that NYPD officers continue to block civilians’ First Amendment rights to record public police activity during the de Blasio administration, despite an August 2014 memo reminding officers against such interference,” said Lumumba Bandele, a spokesperson for Communities United for Police Reform.