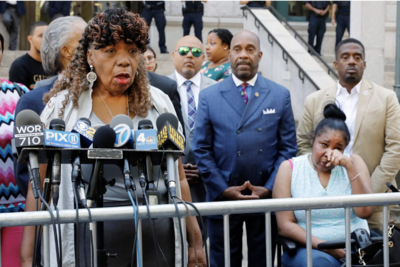 The decision to end a yearslong civil rights investigation without charges was made by Attorney General William Barr and was announced the day before the five-year anniversary of the deadly Staten Island encounter, just as the statute of limitations was set to expire.

Civil rights prosecutors in Washington had favored filing criminal charges against Officer Daniel Pantaleo, but ultimately Barr sided with other federal prosecutors based in Brooklyn who said evidence, including a bystander’s widely viewed cellphone video, wasn’t sufficient to make a case, a Justice Department official told The Associated Press.

Richard Donoghue, the U.S. Attorney in Brooklyn, said at a news conference that while Garner’s death was tragic, there was insufficient evidence to prove that Pantaleo or any other officers involved in the confrontation on a Staten Island sidewalk had willfully violated his civil rights.

Garner’s family was incensed by the decision, the latest from a Justice Department under President Donald Trump that has scaled-back use of consent decrees aimed at improving local police departments found to have violated civil rights.

The Rev. Al Sharpton renewed his calls for the New York Police Department to fire the 34-year-old Pantaleo, who’s been on desk duty since Garner’s death and is awaiting the results of a disciplinary hearing that could lead to his firing. Mayor Bill de Blasio’s office said it expects a decision by Aug. 31.

“Five years ago, Eric Garner was choked to death,” Sharpton said. “Today, the federal government choked Lady Justice, and that is why we were outraged.”

Pantaleo’s lawyer, Stuart London, said the officer “is gratified that the Justice Department took the time to carefully review the actual evidence in this case rather than the lies and inaccuracies which followed this case from its inception.”

Pantaleo’s union president, Pat Lynch, said: “scapegoating a good and honorable officer, who was doing his job in the manner he was taught, will not heal the wounds this case has caused for our entire city.”

Garner’s death — after he refused to be handcuffed for allegedly selling loose, untaxed cigarettes — came at a time of a growing public outcry over police killings of unarmed black men that gave impetus to the national Black Lives Matter movement. Just weeks later, protests erupted in Ferguson, Missouri, over the fatal shooting of unarmed teenager Michael Brown.

When a Staten Island grand jury declined to indict Pantaleo on state charges in December 2014, demonstrations flared in New York and several other cities.

Amid those demonstrations, a man angry about the Garner and Brown cases ambushed and fatally shot two New York City police officers as they sat in their cruiser, further shocking the city and leading to the creation of the pro-police Blue Lives Matter movement.

Prosecutors in Brooklyn repeatedly watched video of the confrontation between Garner and police, Donoghue said, but weren’t convinced Pantaleo willfully violated the law in using a chokehold, which is banned under police department policy.

Pantaleo initially tried to use two approved restraint tactics on Garner, much larger at 6-foot-2 and about 400 pounds, but ended up wrapping his arm around Garner’s neck “in what was, in effect, a chokehold” for about seven seconds as they struggled against a glass storefront window and fell to the sidewalk, Donoghue said.

Garner could be heard on bystander video crying out “I can’t breathe” at least 11 times before he fell unconscious. The medical examiner’s office said a chokehold contributed to Garner’s death.

The federal probe resulted in two sets of recommendations.

The U.S. Attorney’s Office in Brooklyn recommended no charges, while civil rights prosecutors in Washington recommended charging the officer. Barr, who watched the video himself and got several briefings, made the ultimate decision, a senior Justice Department official said.

The official spoke on condition of anonymity in order to discuss internal deliberations and investigative matters.

Donoghue announced the decision not to charge Pantaleo after meeting with Garner’s family, but the news was reported in the media beforehand, angering advocates.

At the news conference, Donoghue said he expressed his and Barr’s condolences. He said Garner’s death was a tragedy and that “for anyone to die under circumstances like these is a tremendous loss.” He also apologized for the length of the investigation, calling the delay “entirely inappropriate and unacceptable.”

In the years since Garner’s death, the NYPD has made a series of sweeping changes on how it relates to the communities it serves, ditching a policy of putting rookie officers in higher-crime precincts in favor of a neighborhood policing model that revolves around community officers tasked with getting to know New Yorkers.

De Blasio, who is touting his leadership on police-community relations on the presidential campaign trail, said the city is not the same as it was five years ago.

“Reforms over the last five years have improved relations between our police and our communities,” de Blasio said in a statement, adding that crime was at record lows and 150,000 fewer people were arrested last year than the year before he took office.

But some activists, including Garner’s family and relatives of others killed by police, have argued the changes aren’t enough.

De Blasio also said that it was a mistake for the city to wait for federal prosecutors to finish investigating Garner’s death before the police department began disciplinary proceedings. But there is no rule requiring the NYPD to do so.

Police reform advocates said the decision not to charge Pantaleo was upsetting but to be expected.

“As a black man in America I have no expectation that we will receive justice in court without radical change in this country,” Newsome said.