NYPD officers in certain encounters must identify themselves and inform the public they can deny a search when there isn't probable cause.
Kayla Simas
AM New York
View the original piece 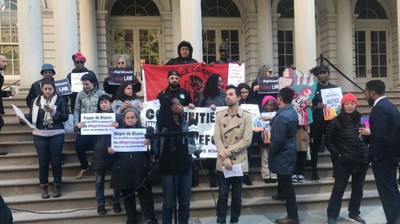 Public officials and police reform advocates pledged to hold the NYPD accountable for their encounters with the public as new legislation goes into effect Friday.

Holding signs and banners reading "I do not consent to this search," activists rallied on the steps of City Hall to celebrate the implementation of the Right to Know Act. The legislation has two components: a requirement for officers (in certain instances) to identify themselves when approaching the public, and a mandate to inform a person of their right to refuse to consent to a search when the officer doesn't have probable cause.

“Tomorrow, the Right to Know Act will be a reality. You will know who’s stopping you, and why, and if searched without rights, you can deny it,” said Councilman Antonio Reynoso, who was joined by colleagues including Jumaane Williams, Brad Lander and Carlos Menchaca. “This is a celebration, but at the same time we must make sure the NYPD knows we are not sleeping at the wheel. We will hold them accountable.”

Michael Sisitzky, the policy counsel at the New York Civil Liberties Union, described the act as a direct response to police abuses.

“Too many times officers are poking holes in the Fourth Amendment,” Sisitzky said. “Instead of telling people to open their bags, and demanding it, now they must ask individuals to open their bags, and we have the right to say no. This has always been the law, though. But, the way it was been written has been misleading for many.”

“We have the Fifth Amendment, which is the right to not speak,” Kallos said. “Use it. Use the Right to Know Act. You can say no to being searched.”

The Right to Know Act passed the City Council last December as a compromise bill that disappointed some reform advocates by limiting the type of encounters that would require police officers to identify themselves. Cops only are required to offer their identity (along with a business card) when encountering a member of the public who they suspect is involved with criminal activity, but not necessarily when merely questioning a bystander on the street.