Police Reform Is Coming to New York City, but Will the NYPD Follow the Law? 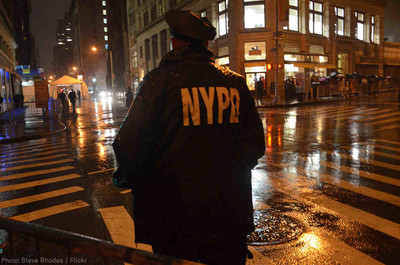 In December 2017, the New York City Council passed two police reform measures, collectively known as the Right to Know Act, which aimed to improve communication and transparency during police stops and searches. On Friday, both bills will take full effect, and the New York Police Department will be tasked with implementing the council’s mandate to become more transparent and accountable. But there are good reasons to be skeptical that the NYPD will implement the law faithfully.

The first measure requires the NYPD to develop a policy that instructs officers to let people know when they have the right to refuse to be searched. Under the consent-to-search law, if an officer wants to search someone, her home, her vehicle, or her property without a warrant or a legally recognized exception under the Fourth Amendment’s warrant requirement, the officer must ask if the person voluntarily agrees to be searched.

If the officer has a body-worn camera, the encounter will be recorded, and the officer will be required to let the person know how to request a copy of that footage. The NYPD will also have to start keeping track of these encounters and publicly report how many searches are happening and, perhaps most importantly, the demographics of the people being asked to let an officer search them.

The second part of the Right to Know Act requires officers to identify themselves at the start of certain enforcement encounters, provide an explanation for why they stopped someone, and offer the person a business card at the end of any encounter that doesn’t result in an arrest or summons. So, for example, when officers ask to search someone or stops-and-frisks him, those officers will have to explain who they are and why that encounter is happening. If the person isn’t arrested or issued a summons, the officer must give him a business card, which will also include information on how to submit comments or complaints about how they were treated.

Unfortunately, the version of the ID bill that became law has a huge loophole that swallows the original intent of the law. Under previous versions, officers would need to identify themselves in any nonemergency encounter involving investigative questioning. These types of encounters represent the vast majority of police stops. The version that was passed into law only requires officer identification when a person is “suspected of criminal activity.” But police don’t need to suspect someone of criminal activity to approach them, disrupt their daily routines, and question or harass them, since New York case law allows officers to approach people without any kind of suspicion and ask them to produce ID or question them about where they’re going.

The Right to Know Act’s passage was bittersweet for the New York Civil Liberties Union and our partners in Communities United for Police Reform (CPR), a coalition led by the communities who are most directly impacted by police abuse. We had advocated on behalf of these two bills for more than five years, but in the days leading up to the vote, we were forced to withdraw our support for the ID bill after it was severely watered down in closed-door meetingsbetween the bill’s sponsor, the council speaker, and the NYPD. CPR and the NYCLU were shut out of the backroom deal.

Such bad-faith negotiations raise a specter: Will we actually see the changes required by the Right to Know Act embraced by officers on patrol? That really depends on how committed the NYPD is to implementing these laws in good faith. And so far, the NYPD’s actions have created some reason for concern beyond the last-minute backroom deal.

After the bills were passed, the NYPD again disregarded the concerns of the people behind the legislation. The consent-to-search law starts off by expressing the council’s intent for the NYPD to develop its new policy “with input from the community and Council.” But the communities and advocates who had been the driving force behind this law were not consulted in any meaningful way. Instead, contrary to the law, the NYPD developed its new policies and guidance without any community guidance. This raises serious concerns about the NYPD's commitment to fully following the law.

The Right to Know Act represents a critical response by communities who have been subjected to police misconduct and abuse for decades. It was the result of New Yorkers pushing back on a police department that, for too long, had been left to police itself. But as the NYPD has shown, it will try to hold on to as much of the status quo as politically possible, and that, in the long run, will only worsen the police’s reputation in the communities it’s supposed to protect and serve.