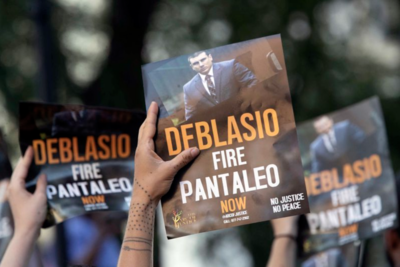 A coalition of police reform advocates is demanding the NYPD fire Officer Daniel Pantaleo for the chokehold death of Eric Garner, and that it discipline all the officers involved in the case.

In a Wednesday letter to Mayor de Blasio and Police Commissioner James O’Neill, more than 60 community groups and family members of people killed by police blasted the mayor for “years-long unnecessary delays and obstruction” following Garner’s 2014 death on Staten Island.

“Daniel Pantaleo must be fired from the NYPD without any non-mandatory benefits, including a ‘good guy letter’ or pension,” the letter reads. “However, Pantaleo is not the only officer who engaged in misconduct that should face disciplinary consequences, and termination from the NYPD must be an option in all cases of misconduct.”

It is signed by Communities United for Police Reform and the family members of Garner, Amadou Diallo, Sean Bell, Ramarley Graham, and 10 other men and woman killed by police since 1999.

The letter also calls for the NYPD to go forward with the disciplinary trial of NYPD Sgt. Kizzy Adonis, who’s on modified duty for her failure to intervene in the takedown of Garner.

The reform advocates also call for the other officers present during Garner’s death, including Justin D’Amico, to face disciplinary charges. D’Amico filed a tax law felony charge against Garner after his death alleging he was in possession of at least 10,000 cigarettes, 22,000 cigars or more than 400 pounds of tobacco. Garner was carrying four sealed packs of untaxed Newports, plus a fifth pack that had been opened and had 15 cigarettes in it.

O’Neill will likely rule by month’s end on the recommendation by Rosemary Maldonado, the NYPD’s deputy commissioner for trials, that Pantaleo lose his job for using excessive force on Garner in using a banned chokehold.