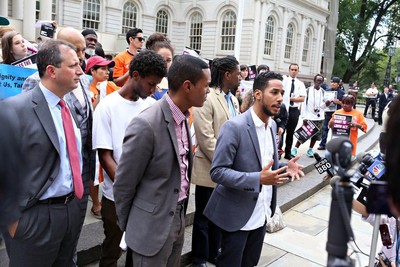 Backers of a pair of hotly contested police reform bills are demanding their sponsors force a vote on the legislation in the next three weeks.

Advocates pushed Councilmen Ritchie Torres and Antonio Reynoso, the chief sponsors of the Right to Know Act, to use a tactic called a motion to discharge to force it to the floor by Nov. 16.

“We cannot wait any longer,” said Gwen Carr, the mother of Eric Garner, who was killed by a police chokehold on Staten Island. “We need them to discharge these bills, and then we need them passed. And we can’t take no for an answer.”

One bill would require cops to inform people that they have the right to refuse to be searched without probable cause. The other would make cops identify themselves with business cards when they stop somebody.

Council Speaker Melissa Mark-Viverito has refused to call a vote, instead making a deal with the NYPD to make a similar set of changes through internal policy.

Torres and Reynoso vowed six months ago to get the bills passed this year, before the current Council session ends, and to force a vote if necessary. They haven’t yet done so or committed to a timeline, and weren’t present for Wednesday’s rally outside City Hall with their usual allies.

he advocates picked Nov. 16 as a deadline because it’s the latest a discharge could happen and allow time for the Council to pass the bills and override a potential mayoral veto by the end of the year.

“A majority, indeed a super-majority of the Council has said that they support the Right to Know Act. Yet these bills have not been brought to the floor,” said Donna Lieberman, head of the New York Civil Liberties Union. “They’re not a heavy lift, or at least they shouldn’t be ... It’s time for our sponsors to stand up for the legislation that is so important, and that they have promised to help us get passed.”

Torres said he was “baffled” by the press conference to pressure him, but declined to say whether he was prepared to use the discharge tactic.

“I have said that I'm committed to a negotiated solution by the end of the year, and that commitment has not changed,” he said.