Stop telling us we didn’t see what we saw. A cop choked Eric Garner to death. The District Attorney wouldn’t prosecute him. The Justice Department turned its back. Now the mayor must step up and fire him. 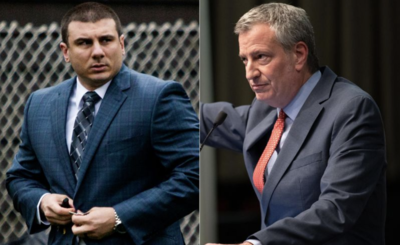 The next time Mayor de Blasio jets off to Keokuk, Iowa or Orangeburg, South Carolina, or wherever he goes to try to sell people on the crazy notion that he can be President of the United States, there should be a large screen with video of Eric Garner telling voters that he can’t breathe.

Because as much as de Blasio wants to bond with the black community and share in the family’s outrage over the Justice Department’s decision, announced Tuesday, to let a police officer get away with a videotaped homicide, the horrible, senseless, unnecessary death of Eric Garner happened on his watch.

And as much as he thinks he is presidential material, the fact remains that de Blasio is still the mayor of a city that continues to employ a cop who jumped on a man’s back and choked him to death because he thought the man was illegally selling cigarettes.

And mince all the words you want over whether or not Officer Daniel Pantaleo actually used a banned chokehold to take Garner down that day on a Staten Island street five years ago on July 17, 2014.

Stop telling us we didn’t see what we saw.

“Our eyes did not lie,” state Attorney General Letitia James said Tuesday. “Today’s inaction reflects a Department of Justice that has turned its back on its fundamental mission — to seek and serve justice.”

Pantaleo was cleared in Garner’s death by a Staten Island grand jury in December 2014.

Police Commissioner James O’Neill has still not decided Pantaleo’s fate. He is awaiting a recommendation from an NYPD judge who heard testimony during a departmental trial on the incident.

Pantaleo has been working on modified assignment with no gun or shield since the incident, receiving raises and even overtime for a while.

Colon was standing next to Garner’s mother, Gwen Carr, who has more at stake in this painstaking justice quest than anyone. For five years, Carr has heard promise after promise and lie after lie. She said she was not surprised by the Justice Department’s decision. She was just disappointed.

“The department of justice made its decision,” Carr said. “Now it’s up to the mayor. We want him to stand up as the mayor he’s supposed to be."