Sweeping Rules For NYPD Searches To Get Council Vote Tuesday 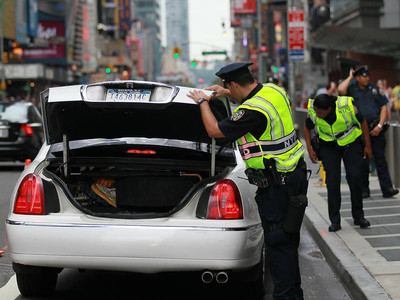 The City Council is set to vote Tuesday on a package of major police accountability legislation that aims to protect New Yorkers from improper police searches. The pair of bills, known together as the Right to Know Act, passed the Council's Committee on Public Safety in a split vote on Monday.

The bills would institute strict requirements for how NYPD officers conduct searches in a variety of circumstances. One, Introduction 182-D, would require cops to identify themselves when searching or questioning criminal suspects and explain the reason for the search. It passed the committee 7-4.

The other, Introduction 541-C, would require the NYPD to instruct officers on how to get informed consent from people they search without a warrant. It would also require cops to record such searches with body cameras if they have them. It passed the committee 8-3.

Progressive Council members and police reform advocates have pushed for the bills since 2014 as a legislative effort to increase police accountability in the wake of the NYPD's so-called stop-and-frisk program, which a federal court struck down as discriminatory. Advocates have argued the program disproportionately subjected people of color to illegal searches as police sought to stamp out low-level crime.

The bills were stalled until Councilman Ritchie Torres (D-Bronx) reached a compromise on the first bill last week with Mayor Bill de Blasio. The latest version of Introduction 182-D wouldn't require cops to identify themselves or explain why they're searching someone during traffic stops or under other circumstances, like when someone seeks entry to a restricted area.

De Blasio was long skeptical of the Right to Know Act, saying the Council should let the NYPD govern its officers' conduct. But he voiced support for the changes last week, telling WNYC's Brian Lehrer that they strike a balance between protecting civilians and letting cops do their jobs.

"It's important to say the legislation sets the broad parameters of what we're trying to achieve, but we don't use the legislative process to literally administer, and if you will, micromanage the police department every day." de Blasio said Friday on WNYC.

But the compromise could keep the bill from ever getting to the mayor's desk. Two of its original sponsors, Councilmen Jumaane Williams and Brad Lander of Brooklyn, plan to vote against what they called a "watered down" Introduction 182-D because it now exempts "the majority of police-civilian stops" from protections.

"For an issue so important, a cause so vital, we believe that it is worth the investment of time and energy to address it correctly," Williams and Lander said in a joint statement on Thursday. "To engage in this kind of zero sum game, at the last possible moment, does not meet that standard."

Williams voted for Introduction 541-C but against Torres' bill at Monday's committee meeting. More than 60 advocacy groups — including Communities United for Police Reform, a major proponent of the Right to Know Act — urged lawmakers to do the same.

The groups say the bill has loopholes that cops could use to conduct illegal searches in "non-emergency" situations without civilians realizing it.

"We know we speak for a significant number of New Yorkers who were dismayed to learn through media reports that in the wake of two terror attacks, the Council would actually be taking steps to restrain the department's ability to conduct lawful searches of individuals who may pose a public threat," the councilmen wrote.

The NYPD Patrolmen's Benevolent Association, the city's largest police union, also opposes the bills, saying they amount to a "piling on of new burdens" for cops.

The full City Council will vote on both bills Tuesday at 1:30 p.m.