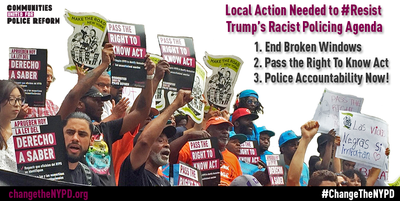 In the weeks since Donald Trump won the presidential election and assumed office, New York City Mayor Bill de Blasio has sought every opportunity to present himself as opposed to Trump. While de Blasio has promoted his administration as a defender against Trump’s anti-immigrant and racist agenda, he has refused to take concrete action within his own power to protect New Yorkers. It is cities and local governments that must take specific policy actions to protect their residents from the impacts of the president’s dangerous agenda and policies. Police reform is a critical area where action is needed.

There are three local actions de Blasio and New York City officials must take to truly protect New Yorkers from Trump’s agenda that promotes criminalization of communities of color and discriminatory law enforcement.

2. Pass the Right to Know Act

New Yorkers continue to experience police abuses during their most common encounters with NYPD officers, whether officers refuse to identify themselves and provide the rationale for the encounter, conduct searches without legal basis and informed consent or unnecessarily escalate such interactions into brutality. Some of the most egregious recent examples include:

The Right to Know Act would help curb abuses during New Yorkers’ interactions with NYPD officers by improving accountability and transparency. It has been awaiting action in the New York City Council since 2014, gaining more and more support. There are now hundreds of organizations from across New York City neighborhoods and many City Council members supporting passage of the Right to Know Act.

The Trump administration’s executive orders and rhetoric on law enforcement only enable the further criminalization of nonwhite communities and policing abuses in cities like New York. That’s why it is more important now than ever before for local officials to take action within their authority to protect their residents. Also, as federal law enforcement is empowered by Trump to engage in abusive policing, it is even more critical to adv

The lack of police accountability is one of the central problems that allow police abuses, brutality and killings to continue. When police officers are not held accountable for abuses in a timely and meaningful way, it sends a signal to that officer and others about what is acceptable. That is why officers involved in unjustly killing civilians often have histories of involvement in police abuses and brutality.

The Trump administration has shown no interest in promoting police accountability and instead seeks to justify improper police action. In the three years of his administration, de Blasio has taken no steps to fix the NYPD’s continued failure to hold officers accountable in a timely and meaningful way. It’s been more than five years since NYPD officers killed Ramarley Graham and the NYPD, the courts, nor de Blasio has held anyone accountable. The many officers involved have instead received pay increases since the killing of Graham. It’s been nearly three years since Eric Garner was killed and none of the officers involved in his killing and related misconduct have been held accountable. An NYPD officer was docked only five vacation days for nearly killing 14-year-old Javier Payne. At the same time, the de Blasio administration has misused a state law to conceal misconduct by the officer who killed Eric Garner and the disciplinary records of other officers involved in misconduct.

The people of New York and others must act now to force accountability from the mayor, the city council and the NYPD. Mayor deBlasio can’t portray himself as a progressive champion of the city to the world, while New Yorks are seeing no progressive changes to hold the police accountable.ance accountability and transparency in people’s most common encounters with their local police departments to prevent abuses. The time to advance local police accountability is now, yet a recent report indicates that de Blasio is seeking to block the Right to Know Act for his personal political benefit.