'We are fighting for justice': Protesters call for firing of NYPD officers at 'We are Eric Garner' rally 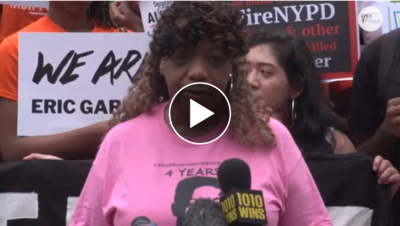 The "We are Eric Garner" rally, held on the five-year anniversary of Garner's death, followed Tuesday’s decision by the Department of Justice to not pursue civil rights charges against NYPD officer David Pantaleo, who put the 43-year-old black man in a chokehold.

“It’s unclear to me how five years later, we still have Pantaleo on the police force,” New York state Sen. Brian Benjamin said. “It’s as if nothing happened, and I think it’s wrong.”

Organizers linked arms in front of signs that read “#firepantaleo and all cops involved in #Eric Garner” and “Justice for Eric Garner” as they marched to the NYPD headquarters. Garner’s family members including his mother, Gwen Carr, and a cousin, Dolores Duke, were at the forefront of the march.

Some protesters carried signs reading "I can't breathe," "Five years too long for justice" and "#FireNYPD."

“Today we are here, standing with all youth with the question: 'When do our humanity and our rights begin to matter?,'" Heaven, a youth organizer with Brotherhood-Sister Sol said outside NYPD headquarters. “What happened to Eric Garner is something that we all fear happening to us.”

Garner's mother urged de Blasio to fire the officers involved in her son's death: “You have the power,” Carr said. “Assert your power.”

“Today we are here, standing with all youth with the question: 'When do our humanity and our rights begin to happen, Heaven, a youth organizer with Brotherhood Sistersoul said  outside the NYPD headquarters at the end of the march. “What happened to Eric Garner is something that we all fear happening to us.”

Miliery Acosta, a 17-year-old immigrant from the Dominican Republic, said she was marching for two primary reasons.

Garner, a father of six, was accused of selling single cigarettes outside a store on Staten Island when Pantaleo attempted to arrest him. Pantaleo knocked Garner to the ground and held him around the head and neck.

Videos of the arrest spread widely on social media and sparked nationwide protests five years ago. Garner is heard repeatedly saying “I can’t breathe” while being pinned to the ground by Pantaleo.  His last words became a rallying cry throughout the U.S. for Black Lives Matter, a movement to end violence and systemic racism in the justice system.

Carr issued a list of demands after Tuesday’s decision: that Pantaleo be fired without a “good guy letter” and without non-mandatory benefits, that NYPD schedule a disciplinary trial and fire Sgt. Kizzy Adonis, the officer in charge of the 2014 crime scene and that the NYPD bring discipline charges against and fire all the officers who engaged in misconduct related to the Garner case.

"We've been failed by every other source," Carr told CBS. "(Pantaleo) should be fired. At least that would give me closure."

NYPD would not comment on the number of officers overseeing Wednesday's protest or security measures being taken.

De Blasio has said that Pantaleo is entitled to due process under state law and that his fate will be decided on Aug. 31 by Police Commissioner James O’Neill.

The rally is being led by Make the Road New York’s Youth Power Project, an organization that empowers immigrant and working class communities, and Communities United for Police Reform, a movement that focuses on ending abusive and discriminatory policing.

At the end of the three-hour rally, 25-year-old Alexis Silva laid on the brick sidewalk outside the NYPD offices as a fellow protester outlined her figure in white chalk, similar to that of a crime scene. Many others followed suit, outlining bodies and writing “Justice for Eric Garner.”

"I’ve lived in the projects all my life, and so I’ve seen first-hand discrimination of and criminalization against black bodies,” Silva said. “We’ve never seen accountability for our police.”