This past week had some good news related to what Communities United for Police Reform (CPR) was able to secure in the New York State budget. It was also a hard week with actions and events related to the continuing fight to secure some semblance of accountability for the killings of Saheed Vassell and Eric Garner.

Some Policing Advances in the State Budget

For several years, CPR has been advocating for a ban on arrests for violations as well as comprehensive statewide reporting of police killings, deaths in police custody and discriminatory police enforcement of low-level offenses. Thanks to Albany legislative leadership, as well as organizing and advocacy by CPR and our members, the state budget that was passed in Albany last week included advances for police accountability and transparency, such as:

In spite of these advances, we still have a long way to go to increase police accountability and transparency in New York. CPR members and partners from across New York state will be in Albany this coming week to call for passage of the #SaferNYAct – a package of bills endorsed by a growing coalition of almost 100 organizations.

On April 4, 2018, Saheed Vassell was tragically gunned down in broad daylight, in a hail of 10 bullets by NYPD officers from the hyper-aggressive plainclothes “anticrime” and the hyper-militarized “Strategic Response Group” units. Saheed was unarmed, and contrary to NYPD propaganda seeking to criminalize and dehumanize him, Saheed posed no threat to himself or his neighbors at the time he was killed. He was a beloved and well-known member of his Crown Heights community.  Saheed’s family commemorated the year since Saheed was killed with two events this past week:

Saheed’s parents, Eric and Lorna Vassell, rallied at City Hall to demand that Mayor de Blasio and the NYPD immediately move to charge and fire officers responsible for killing Saheed and related misconduct (including illegally leaking sealed records of his medical history and alleged contacts with law enforcement). The rally was just days after the Vassell family received the devastating news that the NYS Attorney General would not be charging any NYPD officers responsible for killing Saheed or officers who engaged in related misconduct. Saheed’s parents were joined by CPR members, partners and elected officials at the rally last week.

On Thursday, April 4th, Saheed’s family also organized a Crown Heights vigil and march with CPR member organization Brooklyn Movement Center to honor Saheed’s life and continue to call for justice. The vigil had been planned to take place at the corner of Utica and Montgomery where Saheed was killed, but Saheed’s friends asked that the vigil be moved to the barbershop across the street “to bring everyone to a place of love” instead of death. Following the vigil, Saheed’s family marched with his Crown Heights community to honor his life and demand justice for his killing.

Eric Garner was killed by NYPD officer Daniel Pantaleo with a banned chokehold on July 17th, 2014 – as other officers failed to intervene or provide aid in spite of Eric pleading “I can’t breathe” 11 times. The third pre-trial hearing before Pantaleo’s disciplinary trial was on Thursday, April 4th. The Civilian Complaint Review Board (CCRB) is prosecuting Pantaleo because the NYPD refused to substantiate charges or prosecute Pantaleo. 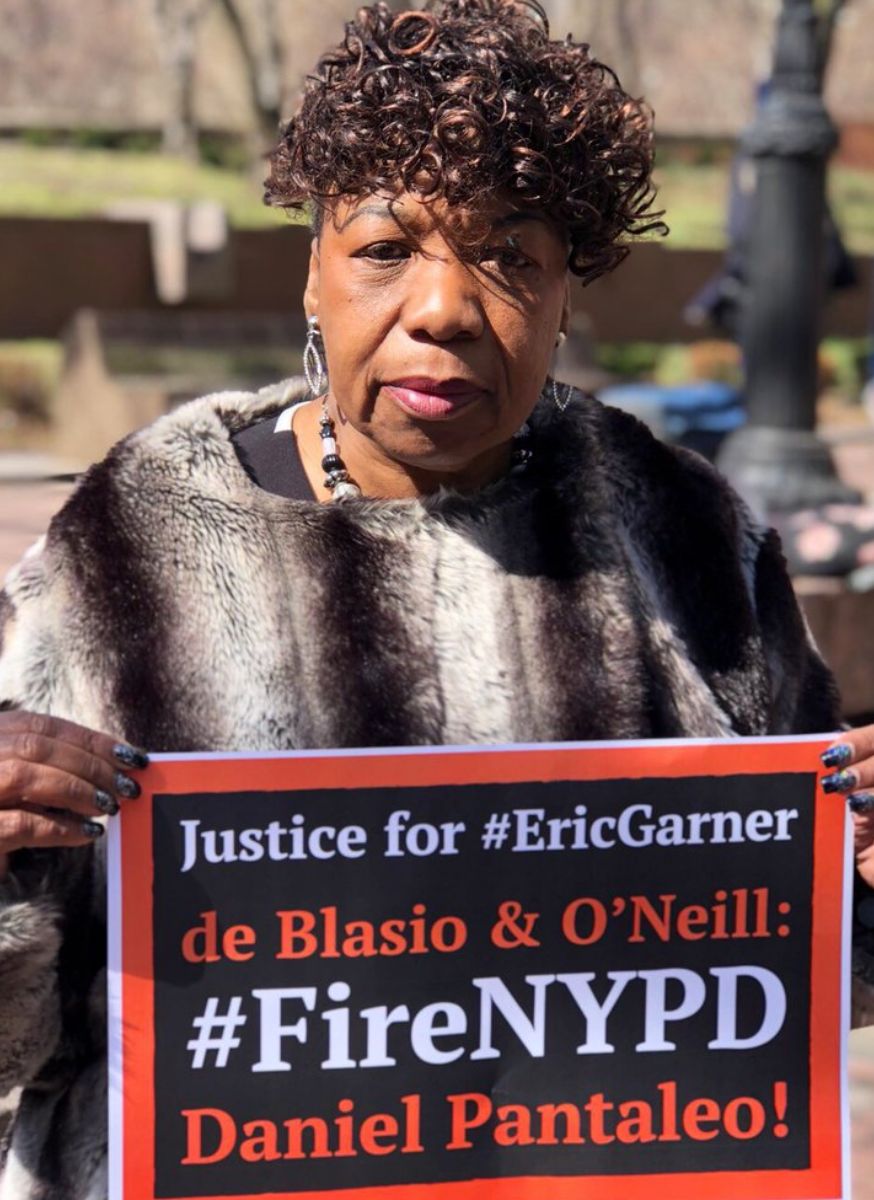 Last week’s hearing made clear that Pantaleo’s defense attorneys will seek to advance false narratives and attempt to create distractions. They submitted a motion to dismiss the charges against Pantaleo and prevent the upcoming discipline trial. We were glad to see an NYPD administrative judge reject that motion. Also troubling is that the defense plans to call on an NYPD-employed surgeon to advance the false claim that Pantaleo didn’t use a chokehold, in order to attempt to blame Eric’s death on himself. The surgeon reportedly made the “assessment” in 2014 without reviewing any autopsy reports. Gwen Carr, Eric’s mother, responded to the disgraceful stunts by Pantaleo’s attorneys by stating: “They’re trying to say the whole world’s eyes were lying to us. I know that the NYPD will throw everything at me in the upcoming trial in order to escape being held accountable for having killed Eric. But, I’m ready for the fight. I won’t give up until I get justice for my son.”

Eric Garner’s family is continuing to call for Pantaleo to be fired as well as all the other officers who engaged in misconduct surrounding Eric’s death - including Sgt. Kizzy Adonis who has had discipline charges pending since 2014. No discipline trial has been scheduled for Adonis, and to Eric’s family’s knowledge, so far no charges have been brought against any other officers who reportedly lied on official reports, failed to intervene, illegally leaked sealed records, and more.