From City Hall to Albany: We're Working To #ChangetheNYPD!

Communities United for Police Reform is in full swing!

From our communities to City Hall to the state capital to the Oval Office in Washington, DC—CPR leaders are delivering powerful demands for police accountability and transparency, as well as an end to discriminatory and abusive policing.
This month, we have been advocating for city and state action that would help begin to bring justice and safety to communities impacted by discriminatory policing and police violence.

On March 12 at City Hall, CPR members testified at the New York City Council Public Safety Committee hearing on community policing to bring the voices of community members directly into the conversation. CPR leaders called for the passage of the Right To Know Act; went on record to oppose the addition of 1000 new cops; and promoted community safety improvements through community investments like housing, jobs, and education, rather than criminalization and unjust policing of people of color, homeless, immigrant, LGBTQ, women, and Muslim New Yorkers, and other communities that already bear the brunt of police abuse and harassment.

Dozens of CPR members recently met with New York City Council members to discuss why New Yorkers need the City Council to pass the Right to Know Act. Get the latest updates and join the conversation using: #RightToKnowAct. 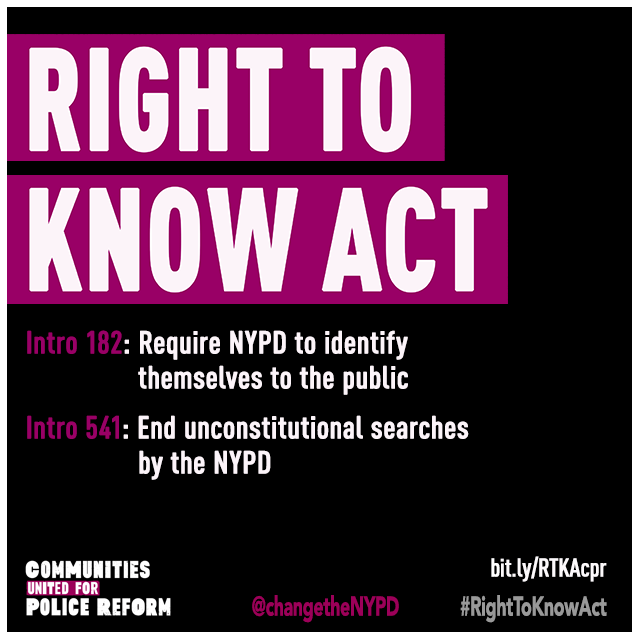 [Learn more about the Right to Know Act to improve communication & transparency between NYPD and New Yorkers.] 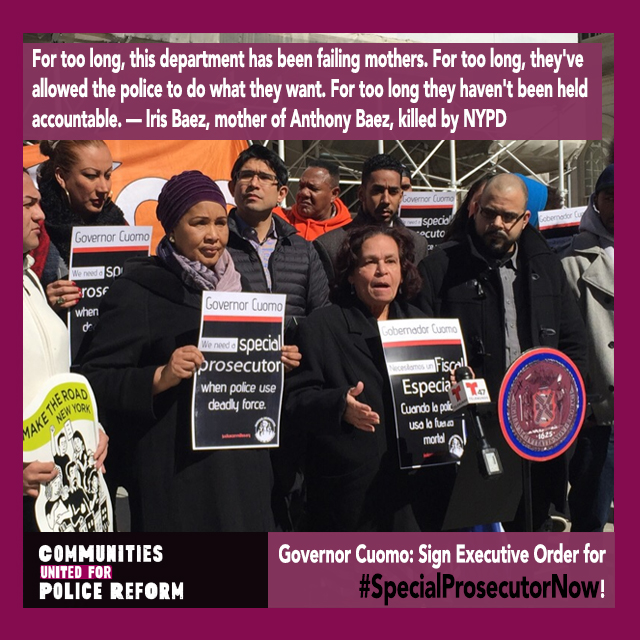 Over the past several weeks, CPR, elected officials and community leaders have been in Albany calling on Gov. Cuomo and state legislators to make New York a national leader in police reform by implementing meaningful and systemic changes to hold police accountable and improve transparency of policing data.

With our partners and allies, we have been supporting the demand of the surviving family members of New Yorkers unjustly killed by the police that Governor Cuomo sign an executive order to authorize the appointment of a Special Prosecutor in cases when police use deadly force against civilians.

On March 11, we testified before the NYS Assembly, alongside Valerie Bell – the mother of Sean Bell who was killed by NYPD in 2006. In late March, we held a press conference and advocacy day in the state capitol to elevate these important calls for accountability, justice and transparency.

CPR member, ColorOfChange.org, has launched an online petition where you can urge Governor Cuomo to take action today.  Follow the link below to sign the petition and share it with your family & friends!

Some of our demands to #ChangetheNYPD and end discriminatory policing in New York were also endorsed by the President's Task Force on 21st Century Policing in its recommendations, including the:
Thanks to the leadership of CPR members and advocates for justice from across the country, the voices, needs and solutions of impacted communities were part of this critical conversation.
The systemic issues of discriminatory policing require systemic, meaningful and lasting change.
In New York, we have the opportunity to be a national leader in police accountability and to enact changes that end abusive policing and protect the safety and rights of all New Yorkers.

It’s going to take all of us to make sure this change happens. We are excited to move forward in collective action and struggle with you!

Thanks for your support!