Today, Communities United for Police Reform, advocates and elected officials held a RALLY & PRESS CONFERENCE to demand that court-mandated stop-and-frisk reforms move forward with all stakeholders at the table, especially New Yorkers most directly affected by discriminatory stop-and-frisk abuses! Following the rally, dozens of supporters PACKED THE COURT for oral arguments on the police unions’ appeal to intervene in the federal stop-and-frisk lawsuit (Floyd v. City of New York).

It’s been over a year since a landmark federal ruling found the NYPD’s stop-and-frisk program unconstitutional.  Since that time, we have been at a standstill in moving forward with critical court-mandated reforms, while the Court has enforced a “stay” on remedies and the police unions have continued attempts to block reforms from moving forward. Just a few weeks ago, CPR filed an amicus brief signed by over 50 organizations to oppose the police unions’ appeal of their previously denied motion to intervene. One part of the court-mandated reforms includes a process to engage key stakeholders citywide in identifying changes that are needed to NYPD practices.

While there has been a decrease in NYPD-reported pedestrian stops, there is no evidence that discriminatory and abusive stops have ended.  We continue to see Black and Latina/o New Yorkers impacted at disproportionately high rates, still accounting for over 80% of stops this year. It is crucial that stop-and-frisk reforms move forward with direct input from affected communities to ensure lasting changes to this discriminatory practice and help keep New Yorkers safe. 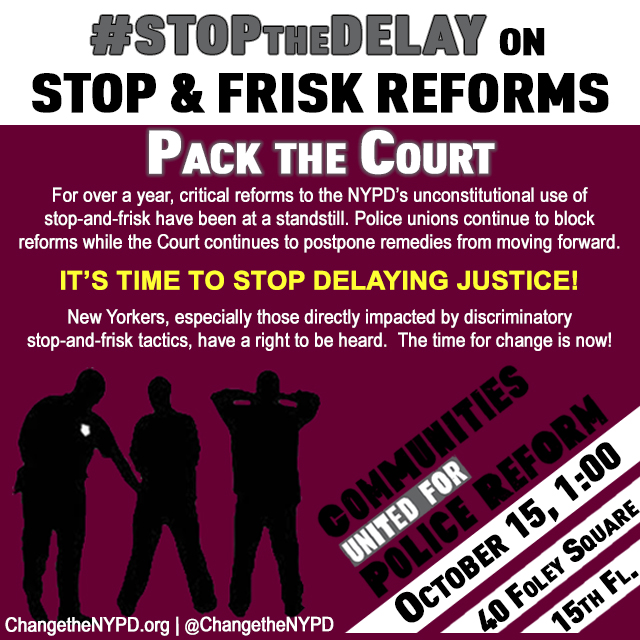