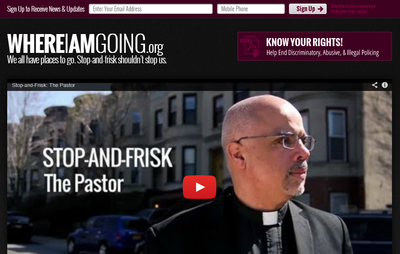 On June 30,  Communities United For Police Reform (CPR) launched a new video series to highlight the negative impact of the NYPD's stop-and-frisk policy. Produced by Firelight Films, the short documentaries tell the stories of ordinary New Yorkers – a police officer, a mother, a clergyman and a young person – and how they and their neighborhoods have been impacted by the policy.

On the heels of the recently passed Community Safety Act, the veto of the legislation, and the tragic Trayvon Martin case, debate on the controversial stop-and-frisk policy and racial profiling continues to grow in New York and across the nation. The video series illustrates the inhumane side of the NYPD policy and demonstrates the ripple effect nature of how stop-and-frisk impacts entire communities.

The first video, "Stop-and-Frisk: The High School Senior", tells the story of Flatbush, Brooklyn-based recent high school graduate Kasiem, a member of CPR member LatinoJustice PRLDEF's youth program. Since the age of 13, he has been stopped and frisked 7 times. The first time he was stopped and frisked he was on his way to school to pick up a friend, a part of his daily routine. He was frightened and confused, so much so that when he was robbed at a later point, he didn’t call the police. He has friends that have been stopped and frisked leaving the supermarket, while giving each other high fives, and returning from football practice. He lives in constant fear that he will be harassed during his commute.

In the coming weeks, the campaign will release additional stories highlighting the way that this discriminatory policing policy impacts families, faith communities, the police department, neighborhoods and whole communities. For additional information, to watch the full videos, and connect with others on this issue, please visit: www.whereiamgoing.org. The videos will be accompanied by an online social media conversation, follow, search for the hashtag #WhereIAmGoing.