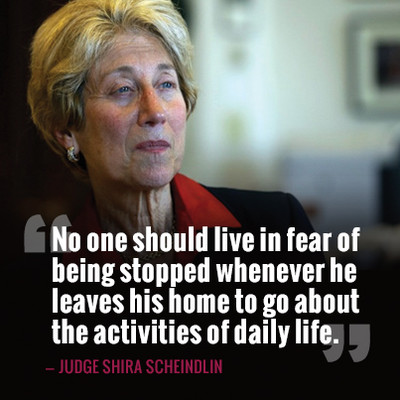 On August 12, Judge Schira Scheindlin issued a ruling deeming NYPD’s stop-and-frisk practices unconstitutional. In the nearly 200-page decision, she found the NYPD to be in violation of both the 14th Amendment equal protection clause as well as the 4th Amendment protection against unreasonable searches and stated: “...targeting young black and Hispanic men for stops based on the alleged criminal conduct of other young black or Hispanic men violates bedrock principles of equality.”

Darius Charney, senior staff attorney at CPR member the Center for Constitutional Rights, which brought the case, said “The NYPD is finally being held to account for its longstanding illegal and discriminatory policing practices.”

Djibril Toure of CPR member organization Malcolm X Grassroots Movement, which was instrumental in identifying plaintiffs for the case, said “This is vindication, a sign of justice that we’ll hopefully receive when the community has a chance to sit down and create change with the NYPD.”

The ruling is an important milestone in the struggle for police accountability but there is still much to be done. In the second part of the two-part ruling – on remedies – Judge Scheindlin called for a several changes, including a federal monitor to oversee changes and a collaborative remedies process that includes the input of affected communities throughout the city. CPR will be working to ensure that the voices of those most impacted by discriminatory and abusive policing have a voice in this process.

For more on the decision, please visit the Center for Constititional Rights Floyd page.