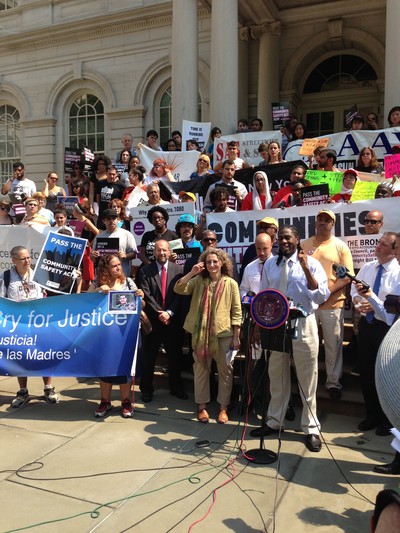 On Monday, June 24, 2013, New Yorkers from across the five boroughs, representing the breadth of diverse communities of the city, gathered on the steps of City Hall to call on the New York City Council to swiftly pass the Discriminatory Profiling Ban and Independent NYPD Oversight bills of the Community Safety Act. In 90-degree heat, New Yorkers affected by discriminatory policing, council members, civil rights leaders, faith leaders, and community advocates spoke out on the need for the Council to pass these bills for meaningful reform of the NYPD and a city in which the rights, dignity and respect of ALL New Yorkers are upheld. Council Member Jumaane Williams, lead co-sponsor of the the bills argued forcefully that "no communities should have to choose between safer streets and better policing." Council Member Brad Lander, also co-sponsor of the bills, said the bills would help ''restore the bonds of trust for safer policing." Donna Lieberman, Executive Director of the New York Civil Liberties Union, said "New Yorkers deserved policing based on behavior, not the color of their skin." Ryan Gibbs of the Picture the Homeless noted the importance of the expansion of protected categories in the anti-profiling legislation to include housing status/homelessness. "I'm here today because racial profiling makes communities unsafe," declared Nadia Alexis of the Malcolm X Grassroots Movement.

Later on Monday, the City Council voted overwhelmingly (41 to 8) to discharge both Community Safety Act bills from the Public Safety Committee so that the full City Council would have an opportunity to vote on the bills.  The victory of this historic discharge motion paves the way for the Council to vote on the bills in the near future - possibly as early as Wednesday June 26th.

For more information about the Mayor's false assertions about the bills made at his own press conference on June 24 and a fact sheet explaining the actual content of the bills, click here.