On February 2, 2012, Ramarley Graham was shot and killed in his own home by NYPD Officer Richard Haste in front of his grandmother and 6-year-old brother.  Haste and several other NYPD officers busted into the family's home without a warrant, killed Ramarley, and engaged in misconduct and abuses of his family.  Since 2012, Ramarley's family has fought tirelessly for justice and accountability with support from people like you. On Tuesday, January 17, NYPD Officer Haste will FINALLY face an NYPD administrative trial, and the family needs our support now more than ever. 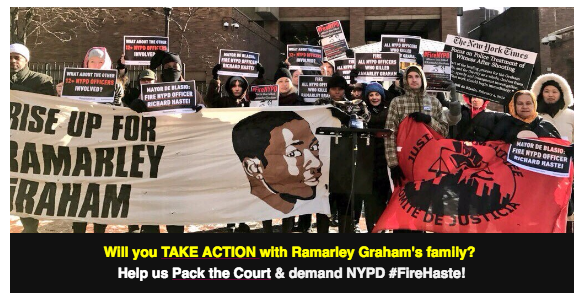 Starting Tuesday, January 17, we will join Ramarley's family at the NYPD trial to pack the court and demand Mayor de Blasio and the NYPD fire Haste and ALL the officers responsible for Ramarley’s killing and misconduct related to it. Will you come out to show your support, and bring another person with you?

The trial is projected to run for at least 4 days and is currently scheduled for January 17th - 20th. However, this is subject to change by the court, and the court reserved additional days from Jan 23-25 for Haste's trial. On TUESDAY (1/17) AND THURSDAY (1/19) AT 1PM, the family is holding a RALLY & press conference outside of 1 Police Plaza.  This is a great opportunity to come out and show your support if you're unable to pack the court with us.

The fact that five years has passed since NYPD killed Ramarley and no officers have yet been held accountable is unacceptable. It's an example of the lack of police accountability that allows police abuses and killings to continue occurring in communities. We hope you will stand with us to let the NYPD & Mayor de Blasio know that New Yorkers will not permit their inaction against officers who brutalize and kill in our communities. We demand accountability!