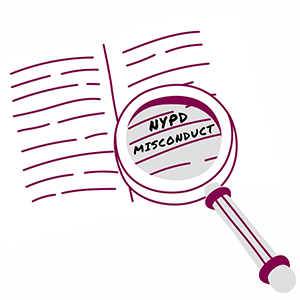 July 28, 2020, New York – Today, Communities United for Police Reform (CPR), represented by the Center for Constitutional Rights and the law firm Orrick, Herrington & Sutcliff LLP, filed a motion to intervene in a lawsuit brought by five New York City police unions, as well as corrections and firefighter unions, that seeks to block NYC from publishing officer misconduct and discipline information and roll back the repeal of Civil Rights Law § 50-a. The unions sued the City earlier this month after the New York State legislature repealed 50-a, which had shielded the records from the public, and the de Blasio administration announced plans to release a searchable NYPD misconduct database.

In a virtual press conference today, CPR and their counsel were joined by Constance Malcolm, the mother of Ramarley Graham, and elected officials including NYC Public Advocate Jumaane Williams, NYS Assemblymember Michael Blake, and others. CPR explained the reason they were filing to intervene in the police unions’ attempt to re-entrench police secrecy.

“We are not a legal organization but we are moving to intervene in this litigation because the stakes are too high,” said Anthonine Pierre, spokesperson for Communities United for Police Reform (CPR). “We led the historic campaign to repeal New York’s notorious police secrecy law 50-a, and are disgusted to see that in just a few weeks since the repeal, police unions are using their outsized financial resources to attempt to roll back this important victory for transparency and democracy. Under Mayor de Blasio, the City expanded 50-a’s harmful impact and has historically played an obstructionist role in police accountability, including efforts to repeal 50-a. The City consistently bends to the will of the NYPD instead of holding the NYPD accountable, and cannot represent CPR or the public’s interests in this litigation.”

On July 22, a federal judge halted the release of the information at the police unions’ request. In the motion filed today, CPR seeks to become a party in the case to lift the restraining order blocking the release of vital public records and to speak on behalf of communities who have been impacted by police violence and have long advocated for racial justice and police accountability.

As part of the intervention request, CPR notes that the City and the agencies the City represents as Defendants (which include the NYPD and CCRB) have often sided against the interests of the community as it relates to police secrecy and the #Repeal50a organizing effort. In fact, the de Blasio administration greatly expanded the reach of 50-a through their defense of NYPD secrecy over the past several years.

“It is simply inherent adversity of interest between CPR and Defendants, many of which have joined Plaintiffs as CPR’s staunchest opponents,” the legal filing stated. “There is no reason to believe Defendants—after years of opposing CPR—will suddenly protect CPR’s interests in this lawsuit.”

“CPR helped me and stood up for my rights and interests,” said Constance Malcolm, mother of teenager Ramarley Graham. “I cannot say the same of the City of New York. In my many attempts to get information about my son’s death, I felt that the City is interested more in protecting its officers than in giving citizens information about, or even the names of, officers who have hurt them and their families.”

CPR emphasized the importance of intervening in the lawsuit, given that both the police union plaintiffs and many of the defendants—including the de Blasio administration and the NYPD—long opposed full repeal of 50-a. As recently as 2018, New York City corporate counsel represented the NYPD, advocating for an expansive interpretation of the protections of 50-a. Thus, CPR argues, unless a party committed to the transparency, accountability, and public scrutiny of policing participates in the case, the democratically-won repeal of 50-a may be rolled back through the courts.

The repeal of 50-a has been a centerpiece of the racial justice and police accountability movement in New York state because police departments and police unions have consistently sought to shield police misconduct and discipline information from public view. #Repeal50a was a common sign and chant at protests across the state in the weeks before the repeal, with celebrities and others using the hashtag on social media.

“CPR has been on the frontlines of the police accountability movement for years and fought tenaciously and successfully for the needed repeal of 50-a,” said Darius Charney, a senior staff attorney at the Center for Constitutional Rights. “No organization has more expertise in policing transparency and accountability or more credibility in representing the interests of the communities most affected by discriminatory and unlawful policing.”

“It’s critical that CPR is allowed to advance and protect the community’s interests in court, just as it did before the legislature that repealed § 50-a,” said Christopher J. Cariello, attorney at Orrick, Herrington & Sutcliff LLP.  “And it’s telling that the unions who brought this case don’t think the community deserves a voice in it.”

CPR’s motion to intervene can be found here.

In June 2020, the New York State legislature passed - and Governor Cuomo signed - the historic repeal of 50-a, the infamous police secrecy law that served to hide police misconduct and discipline from the public. Communities United for Police Reform (CPR) led the statewide coalition that organized for #Repeal50a.

On July 14, the five NYPD police unions, along with the corrections and firefighter unions, filed a lawsuit in state court to block the City of New York from publishing databases with police, corrections or firefighter misconduct information that isn't substantiated and final. On July 15, a state court judge issued a stay, temporarily preventing the City from publishing the planned databases.

Soon after, the case was moved to federal court. On Wednesday, July 22, the federal judge issued a TRO (temporary restraining order) on the City, ordering them not to move forward with any database that includes information related to misconduct or discipline that has not been substantiated and final.

Through their litigation, the police unions are seeking to use the courts to roll back 50-a, re-entrench police secrecy, and undermine the public’s right to transparency and access to information.

About CPR: Communities United for Police Reform (CPR) is an unprecedented campaign to end discriminatory policing practices in New York, and to build a lasting movement that promotes public safety and reduces reliance on policing. CPR runs coalitions of over 200 local, statewide and national organizations, bringing together a movement of community members, lawyers, researchers, and activists to work for change. The partners in this campaign come from all 5 boroughs, from all walks of life and represent many of those most unfairly targeted by the NYPD.

Orrick’s pro bono program has been praised for the dedication of its lawyers to supporting diverse causes with tangible results—including high-profile immigration disputes, civil rights litigation, and grassroots global development through innovative impact finance and social enterprise initiative.  Orrick strategically allocates its pro bono resources to ensure that each lawyer’s work has the maximum impact for the client and the community.