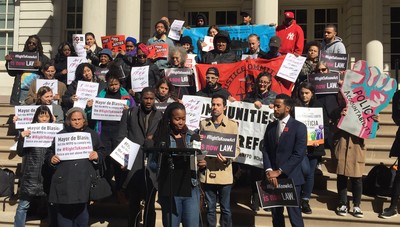 Speakers included New York City Council Members Antonio Reynoso, Jumaane Williams, Brad Lander, and Carlos Menchaca, along with police reform advocates and Iris Baez, the mother of Anthony Baez, who was killed by the NYPD in 1994.

Archived video of the full press conference is available here.

The Right to Know to Act includes a law to help end unconstitutional searches, and a law requiring NYPD officers to identify themselves, explain the reason for interacting with the public, and provide a business card in certain situations.

The consent to search law is a major victory for police reform and for efforts to make the NYPD more accountable and transparent, especially in communities of color, where many New Yorkers continue to experience harmful and abusive policing on a regular basis. This law was won through tireless organizing and advocacy by more than 200 grassroots organizations in the Right to Know Act coalition organized by Communities United for Police Reform (CPR), through the bold leadership of Council Member Antonio Reynoso, and the support and partnership of many City Council Members.

“Trust is perhaps the most critical component in the relationship between the police and the communities they are charged with protecting” said Council Member Antonio Reynoso, the lead sponsor of the consent to search legislation. “The unconstitutional practice of stop and frisk eroded this trust, particularly in communities of color. The implementation of the Right to Know Act will serve as a step towards rebuilding this relationship. Right to Know will ensure that no one is ever unsure of their rights when police request a consent search. I want to applaud all the hard work that so many individuals put in to make this law a reality. I look forward to working with Communities United for Police Reform and the NYPD in the coming months to ensure this law is implemented as written,” Reynoso said.

“This legislation will be instrumental in holding police officers accountable and protecting the civil rights of all New Yorkers,” said Council Member Brad Lander. “Huge thanks to my colleague, Council Member Antonio Reynoso, and to Communities United for Police Reform for being longtime champions of increased transparency and accountability within the NYPD. This is an important and overdue step forward,” said Lander.

But speakers at this news event also noted that the final version of the NYPD identification bill passed into law was sharply criticized by police reform advocates and was opposed by numerous Council Members, because of major loopholes, carve outs and last-minute amendments that are counter-productive to police reform. This is why the police identification law going into effect tomorrow was universally opposed by over 200 groups in the Right to Know Act coalition and numerous Council Members.

"The Right to Know Act was initially crafted to put the NYPD on the track to improving relationships with over-policed communities and increase transparency during police encounters. While the Consent to Search law will enhance trust between police and disenfranchised communities, the police identification component does not go far enough in ensuring that officers are held accountable in all encounters. The question remains whether the NYPD will commit to implementing this new law in good faith, especially in communities of color that still experience heavy police presence in their neighborhoods," said Michael Sisitzky, Policy Counsel at the New York Civil Liberties Union (NYCLU).

If properly implemented and enforced, the Right to Know Act, especially the consent to search law, can help reduce unnecessary interactions with police and reduce harm and abuse in the most common police interactions that take place across the city.  Speakers at the news conference noted that many New Yorkers continue to experience harmful and discriminatory policing on a regular basis, especially black and brown New Yorkers, immigrants, LGBTQ and gender non-conforming New Yorkers, the homeless, women, and youth of color.

But the NYPD is already violating and obstructing the Right to Know Act, as Communities United for Police Reform (CPR) pointed out to Mayor de Blasio earlier this week in a candid and detailed letter.

“Mayor de Blasio’s failure to hold the NYPD accountable and follow the Right to Know Act is a slap in the face of the people who put him in office, and shows that he’s no different from previous mayors who are OK with an out-of-control NYPD that violates the rights of the most vulnerable New Yorkers. It’s already the norm that homeless people have their rights trampled upon by the police every day, and by dragging his feet on implementation of the Right to Know Act de Blasio has proved he does not care,” said Marcus Moore, Board Member and Civil Rights Campaign Leader for Picture the Homeless:

“In a predominately black and working class neighborhood like Central Brooklyn, residents have been subject to unconstitutional stops and harassment by unidentified officers for decades. We are hopeful that the Right to Know Act, if responsibly implemented, can powerfully impact interactions between Central Brooklynites and NYPD officers. We call on the Mayor and the NYPD to comply with the law, and in doing so, support police accountability and transformative public policies for all New Yorkers,” said Anthonine Pierre, Deputy Director of the Brooklyn Movement Center.

Police reform advocates said communities are prepared to hold the NYPD accountable for respecting the right of New Yorkers to decline searches that are not covered by probable cause or warrant, and for ensuring that NYPD officers identify themselves and explain the reason for the encounter to New Yorkers when they are required to do so by law. They will make sure the NYPD includes communities in the implementation of the Right to Know Act, and delivers on its promise to report on both declined searches and consent searches.

“The Right to Know Act (RTKA) is an important step in police accountability. This legislation, especially the consent to search law gives power back to the community members most impacted by abusive policing. While the NYPD is required to implement changes from the Right to Know Act by October 19th, community input is critical to making sure the Right To Know Act isn't watered down or misapplied,” said Will Deepo, Community Organizer at DRUM - Desis Rising Up & Moving.

Police reform advocates said communities will report violations of the Right to Know Act to the Civilian Complaint Review Board (CCRB), ramp up know your rights and cop-watch trainings, and film police misconduct regarding the consent to search, police identification laws and other policing abuses.

“Now that the Right to Know Act laws are going into effect, Cop Watch - the practice of monitoring and documenting police activity to deter and expose misconduct - is more important than ever. We know from experience that the NYPD has a history of not following through on concessions gained through public pressure. There is no way we will know if officers are adhering to the law unless we watch them. We're, therefore, calling on all New Yorkers to stop, watch and record when they see officers interacting with community members and to report any Right to Know Act violations to their local Communities United for Police Reform organization,” said Loyda Colon, Co-Director of the Justice Committee.

CPR brings together a movement of community members, lawyers, researchers and activists to work for change. The partners in this campaign come from all 5 boroughs, from all walks of life and represent many of those unfairly targeted the most by the NYPD. CPR is fighting for reforms that will promote community safety while ensuring that the NYPD protects and serves all New Yorkers.