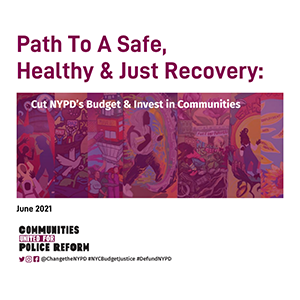 New York, NY – Today, Communities United for Police Reform (CPR), the lead organization of the historic #NYCBudgetJustice campaign, released a policy report, Path to a Safe, Healthy, and Just Recovery: Cut NYPD’s Budget & Invest in Communities, calling for a reduction in the NYPD’s budget, scope, and size, and reallocation of funds to non-police health and safety strategies in New York City’s FY22 budget. Last year, Mayor de Blasio and Speaker Corey Johnson pedaled a $1 billion lie—that the NYPD’s budget would be cut by $1 billion in FY21—but that never happened, and CPR’s report details the extent of these fake cuts, as well as communities’ demands for the FY22 budget. You can read the report, released ahead of the June 30th budget deadline, here.

New Yorkers, like millions across the country, took to the streets in the spring and summer of 2020 in defense of Black lives and against police violence. As made evident by last year’s mass protests and reinforced in a recent poll of Democratic voters, New Yorkers do not want more failed policing and voters “do not believe that putting more armed NYPD officers on the street would be as effective as other public safety strategies for reducing crime.” CPR’s report details community demands for the FY22 budget that will ensure a just transition out of the pandemic by cutting the NYPD’s budget and making critical investments that can immediately improve the health and safety of New Yorkers, with non-police strategies.

“Last year, Mayor de Blasio and Speaker Johnson lied to New Yorkers, saying they would cut at least $1 billion from the NYPD’s expense budget so that close to $2B could be redirected to critical community needs, but they never did and as a result our communities still lack the resources and investments necessary to prevent violence and thrive,” said Kesi Foster (he/him), spokesperson for Communities United for Police Reform. “New Yorkers didn’t take to the streets in historic numbers for a few fake reforms and increases to the NYPD budget, which is what the proposed FY22 budget includes right now. With the influx of federal funding, we have an opportunity to divest from failed policing strategies and invest in community driven health & safety strategies, to make sure all New Yorkers are able to transition out of this pandemic. If the City Council squanders this, they will be failing New Yorkers for years to come. If we want a safe, healthy, and just recovery for all, the City Council needs to cut the NYPD’s budget, reject the 200 new NYPD positions and fake reform initiatives being proposed, and redirect monies to non-police safety solutions, like community-based anti-violence efforts.”

Read Path to a Safe, Healthy, and Just Recovery: Cut NYPD’s Budget & Invest in Communities for more analysis of:

The FY22 demands of the #NYCBudgetJustice campaign are for Mayor de Blasio, Speaker Johnson and the New York City Council to ensure a safe and just transition from the pandemic:

a.     Cut at least $1 billion from the NYPD FY22 expense budget. This includes removing NYPD from all social service-related roles; eliminating the Strategic Response Group, VICE and other abusive units; and canceling plans for 200 new NYPD positions.

b.     Redirect all savings to non-police health and safety solutions.

2.     Deny and cancel all new policing-related initiatives and staffing (incl new positions and consulting contracts for fake “police reform”, that do nothing to reduce police violence or increase safety) – and block increases in the NYPD FY22 expense budget.

3.     Require NYPD transparency in the budget by including updating transparency-related terms and conditions in the adopted FY22 budget to require the NYPD to report on NYC Police Foundation monies used for NYPD programs.