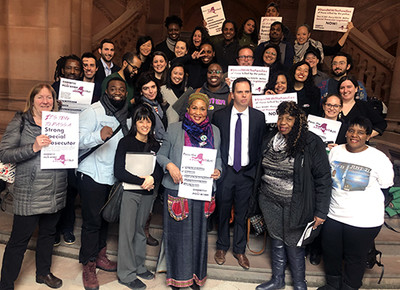 Albany, NY - Today, members and leaders of Communities United for Police Reform held a press conference and rally in the state capitol calling on the state legislature and Governor Cuomo to pass the Safer New York Act and repeal 50-a, New York’s harmful police secrecy law.

The Safer New York Act is a package of bills that would increase police transparency and accountability, and enhance public safety in communities across New York.

One key component of the Safer New York Act is a bill to repeal 50-a, a harmful and widely criticized state law used by the NYPD and other police departments to keep police misconduct and discipline records secret. 50-a has protected abusive police officers and police departments from accountability for police brutality, sexual misconduct, lying in official capacity, and other harmful actions.

To coincide with this news event, nearly 90 organizations committed to police reform released a joint letter to the state legislature calling for passage of the Safer New York Act and repeal of 50-a.

Along with the bill to repeal 50-a, the Safer New York Act includes the following legislation: the Police Statistics & Transparency (STAT) Act requiring police departments across the state to record and report comprehensive demographic and geographic data on deaths occurring during law enforcement activity as well as enforcement of low-level offenses; Special Prosecutor legislation to give the Attorney General’s office jurisdiction in all cases of police killings and deaths in police custody, memorializing and strengthening Cuomo’s Executive Order 147 from 2015; Reduce Unnecessary Arrests for non-criminal, minor offenses legislation to help end harmful and needless arrests for low-level, ticketable offenses; and End Marijuana Prohibition through the Marijuana Regulation and Taxation Act, which will legalize marijuana and address historical harms experienced by communities most impacted by marijuana prohibition.

“New Yorkers cannot continue to be kept in the dark about the critical decisions police officers make every day, including what happens when officers kill the people they are sworn to protect. New York has the opportunity to set a new standard for transparent and equitable policing. The bills included in the Safer New York Act will give New Yorkers access to the information they need to hold police officers accountable for misconduct and to begin undoing the harms of aggressive policing practices on communities of color,” said Michael Sisitzky, Lead Policy Counsel for the New York Civil Liberties Union.

“As families who lost loved ones to the police, we know deeply and intimately how discriminatory, abusive policing destroys lives, families and communities and we also know what changes are needed. The SaferNY Act, which includes repealing 50a and strengthening NY's special prosecutor for police killings - will help to peel away the cloak of secrecy that shields abusive police officers and give families who lose loved ones in the future more answers and more hope for justice and accountability,” Constance Malcolm,” said Constance Malcolm, the mother of Ramarley Graham.

“New York is now one of only two states that grants its police officers special secrecy in their disciplinary records far beyond privacy protections afforded to other public employees through open records exemptions. This creates a culture of impunity within police departments across the state and erodes trust with communities,” said Cynthia Conti-Cook, Staff Attorney with the Special Litigation Unit at The Legal Aid Society. “This must change and Albany must fully repeal 50-A so that civilian complaints and other critical information are made available for the public to truly hold police departments responsible for their disciplinary systems.”

About Communities United for Police Reform: Communities United for Police Reform (CPR) is an unprecedented campaign to end discriminatory policing practices in New York, and to build a lasting movement that promotes public safety and policing practices based on cooperation and respect– not discriminatory targeting and harassment. CPR brings together a movement of community members, lawyers, researchers and activists to work for change. The partners in this campaign come from all 5 boroughs, from all walks of life and represent many of those unfairly targeted the most by the NYPD. CPR is fighting for reforms that will promote community safety while ensuring that the NYPD protects and serves all New Yorkers.