Key Accountability Reforms of the Right To Know Act

In July 2016, the New York Times reported that NYC Council Speaker Melissa Mark-Viverito had agreed to a deal with then-NYPD Commissioner Bill Bratton in an attempt to prevent a vote on the Right to Know Act.  The deal removed some of the most important protections of the Right to Know Act, including policies explicitly prioritized by the White House Task Force on 21st Century Policing, and its underlying foundation of accountability. The following fact sheet includes some of these key distinctions and further demonstrates why the NYC Council must pass the Right To Know Act to ensure meaningful and lasting reforms to protect all New Yorkers. 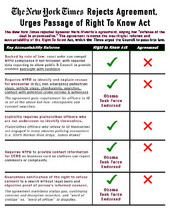