#ThisStopsToday convened to respond to the Staten Island grand jury’s expected failure to indict officers in the killing of Eric Garner, and to call for the end of discriminatory “broken windows” policing, characterized by aggressive enforcement of minor quality of life offenses, that led to the killing of Eric and brutality against too many other New Yorkers. Together we organized the action of Thursday, December 4th, where over 10,000 New Yorkers joined us to protest in Foley Square. Many in our group were arrested in civil disobedience actions at the Manhattan Bridge and on the Upper West Side. 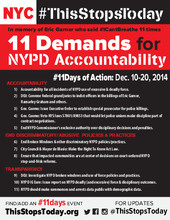