The Right To Know Act is a legislative package that aims to protect the civil and human rights of New Yorkers while promoting communication, transparency and accountability in everyday interactions between the NYPD and the public.  New Yorkers want to live in a safe city where the police treat all residents with dignity and respect, and where police are not considered to be above the law.

Democracy and legislative oversight may be inconvenient for Mr. Bratton’s dictatorial wants, but as the appointee of an elected official within that system of government he must respect them.

On Thursday exactly a year ago, New York City was practically on fire. The startling decision last December 3 by a grand jury to not indict Daniel Pantaleo, the police officer behind the videotaped death of Eric Garner, blew the lid off a razzled metropolis whose citizens were already familiar with police brutality and discrimination. By then, of course, protests had spread across the country, due to the nearly concurrent decision with Michael Brown's case in Ferguson. In New York, as in Missouri, the anger was palpable—like you could reach out and touch it. And it stayed that way, for a while.

In response to comments NYPD Commissioner Bill Bratton made at a Harvard Club breakfast this morning, Communities United for Police Reform released the following statement from spokesperson Monifa Bandele.

“Democracy and legislative oversight may be inconvenient for Mr. Bratton’s dictatorial wants, but as the appointee of an elected official within that system of government he must respect them.

﻿ As the gears of federal government have ground to a halt, a new energy has been rocking the foundations of our urban centers. From Atlanta to Seattle and points in between, cities have begun seizing the initiative, transforming themselves into laboratories for progressive change. Cities Rising is The Nation’s chronicle of those urban experiments.

The highly publicized NYPD brutality against Black athletes has brought fresh spotlight to hyper-aggressive policing and use of excessive force by our city's police department. But New Yorkers in communities across the city frequently experience this police abuse without the same response from City Hall and 1 Police Plaza. It's a reason we continue our work to make NYC safer by holding police accountable to all New Yorkers and advancing systemic reforms that can help end abusive and discriminatory policing. We are gaining momentum in our fight and remain undeterred by NYPD media announcements that seek to quell demands for real, lasting reforms rather than deliver substantive changes for our communities. 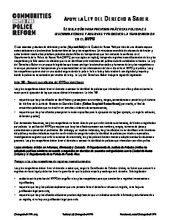 James Blake's treatment by NYPD officer James Frascatore was appalling, and only reinforces the need for substantive reforms that have yet to be acted on by Mayor de Blasio, Commissioner Bratton, and the New York City Council.