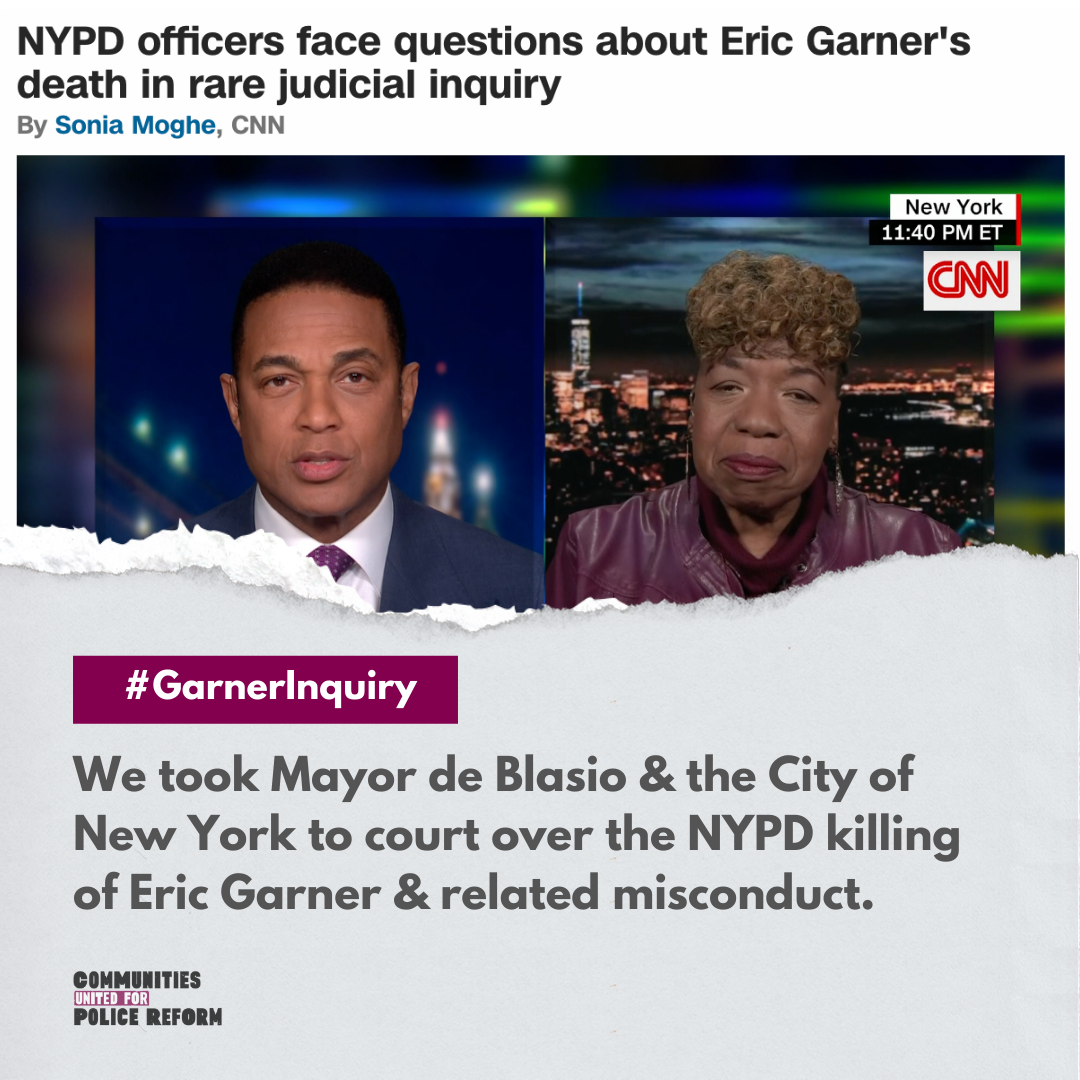 On July 17, 2014, Eric Garner was killed on a Staten Island sidewalk after being placed in an NYPD-banned chokehold by Officer Daniel Pantaleo, during a false and illegal arrest while Eric pleaded "I can't breathe" eleven times. The killing, captured on video, showed many officers who used force in the unlawful arrest and many failed to intervene or provide aid. NYPD officials and officers also attempted to cover up the killing, first claiming that Garner died of a heart attack, illegally leaking sealed records to criminalize Mr. Garner, and lying on official reports.

In August 2019, after five long years of obstruction and refusal by Mayor Bill de Blasio and the NYPD to take action, and tireless organizing by Gwen Carr, Eric Garner's mother, Ellisha Flagg Garner, Garner's sister, the Garner family, and community organizers, Officer Daniel Pantaleo, was finally fired. His firing followed a CCRB prosecuted disciplinary trial that concluded in June 2019 which found that Officer Pantaleo violated Department procedures such as the decades-long ban on the chokehold maneuver.

On September 24, 2020, six years after the killing of Eric Garner, Justice  Madden ruled in petitioners’ favor in their request for a judicial inquiry. The judge ruled that a public judicial inquiry into potential violations and neglect of duty by the de Blasio administration, including former NYPD Commissioner James O'Neill, and other top police officials arising from the death of Eric Garner, could proceed.

Unhappy with the court’s decision, the City tried to block the petition by filing a notice of appeal and by attempting to argue that there was an automatic stay to all further proceedings before the Supreme Court while the City’s appeal was pending. In December 2020, Justice Madden rejected the City’s arguments, once again allowing proceedings related to the inquiry to move forward, unless the City won a stay from an appeals court.

Following Justice Madden’s retirement from the bench, Justice Erika M. Edwards was assigned to preside over the case.

In addition to the petition brought under Section 1109, the Gwen Carr, the Justice Committee, and Communities United for Police Reform submitted a Freedom of Information Law request to the NYPD and the Civilian Complaint Review Board relating to Mr. Garner’s arrest and killing,

In October 2021, the judicial inquiry began in New York State Supreme Court on October 25, 2021, and lasted for approximately two weeks, until November 5, 2021.

During the inquiry, we learned that NYPD Deputy Commissioner Joseph Reznick, who was in charge of the investigation of the killing, did not investigate illegal leaks of Eric Garner’s medical or sealed criminal legal records. Officer Justin Damico lied on official NYPD reports and Lt. Christopher Bannon texted it was “not a big deal” that Eric might be DOA (dead on arrival).

Following the chokehold death of Eric Garner at the hands of a New York Police Department officer, activists are demanding wide-reaching institutional changes to the way the department does business.

Garner, a 43-year-old black man, died on July 17 after a white police officer, Daniel Pantaleo, strangled him in an attempt to arrest him for selling untaxed cigarettes.

Many Jews among thousands who brought Manhattan and Brooklyn to a standstill in protest against police brutality. People of color treated eerily similar to how Jews were treated two generations ago, activists say.
Haaretz

NEW YORK – Many Jews were among the thousands of people who marched in New York City streets Thursday night protesting the decision by a grand jury not to put a white police officer on trial for causing the death of an unarmed black man. More than two dozen demonstrators, including several leading rabbis, were arrested on the Upper West Side after they sat down in the middle of a major intersection in an act of civil disobedience

You can only take to the streets in protest for so long before people start asking, 'what is it that you want exactly?'

And so it has gone with the rallies and marches in response to the non-indictment of Police Officer Daniel Pantaleo by a Staten Island grand jury called to consider charges against him in the July 17 chokehold death of Eric Garner.

When many families are home lighting the menorah for the first night of Hanukkah, an interfaith coalition will use the spirit of the holiday to demand an end to racial profiling and police brutality.

New Yorkers across the city are outraged that there was no indictment of officers involved in the killing of Eric Garner, expressing the need for full accountability and systemic reforms. They plan to come together at Foley Square tomorrow at 5:30 p.m. to say:

HARLEM — Most New York City voters believe police have no excuse for the way they acted during the arrest of Staten Island man Eric Garner, according to a Quinnipiac University poll released today.

Only 24 percent of those polled said the actions by police, caught on camera wrestling with Garner while trying to arrest him, were understandable.  Sixty-eight percent disagreed.

Latin Post
A new poll reveals that the majority of New Yorkers believe New York police officer Daniel Pantaleo should be criminally prosecuted for his actions in the death of Eric Garner, the Staten Island man who died after police put him in an illegal chokehold last month.
Huffington Post
NEW YORK -- A majority of New Yorkers think criminal charges should be brought against police officer Daniel Pantaleo, the cop most directly involved in last month's death of Eric Garner on Staten Island, a new poll shows.
Gary Lapon reports from New York City on a demonstration demand an end to the epidemic of police violence and win justice for victims of brutality and abuse.
Socialist Worker

CARRYING SIGNS with messages like "Black Lives Matter" and "We Are Human," thousands of New York City residents and people from the surrounding area marched in Staten Island on August 23 to demand justice for Eric Garner and other victims of police brutality and violence.

The attitude of those on the march was summed up by Leah, who said, "We're tired of our young people being shot and killed for no reason other than racism. We're not savages or animals. We're not going to take this anymore. Every time a young man gets shot, we're going to come out."

Five thousand people are expected to attend the "We Will Not Go Back" march on Staten Island on Saturday to call for justice for Eric Garner, who died after being put in an illegal chokehold while being arrested by a New York City police officer.

Joining them will be Rev. Al Sharpton, former Gov. David Patterson, City Council Speaker Melissa Mark-Viverito and the families of both Eric Garner and Michael Brown, the teenager killed by police in Ferguson, Missouri earlier this month.

Justice Caravans will bring attendees from Maryland, Pennsylvania, New Jersey and Brooklyn.
The march on Saturday, Aug. 23 is being organized by the National Action Network, 1199 SEIU United Healthcare Workers East, The United Federation of Teachers, and the NAACP. The march is endorsed by hundreds of organization, including the New York Civil Liberties Union and Communities United for Police Reform.