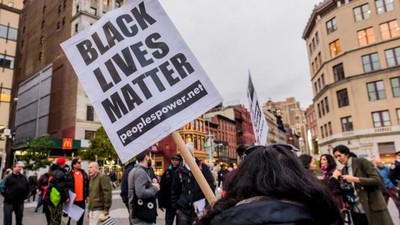 The emails also reveal that the department has held on their findings, including photographs of individual activists, nearly four years later, raising First Amendment concerns.

Those emails were obtained by M.J. Williams Law via a Freedom of Information Law (FOIL) request and include communications between Nov. 2014 and Jan. 2015. They build on a prior FOIL disclosure from July 2018.

“When we received them we noticed NYPD’s numbering system and realized, ‘Oh my God, there’s about 700 more of these,” she said. “So in August 2018 we put in a request and, without going to court but with a couple of appeals, we got the 694 emails from NYPD in Nov. 2018. We’ve been going over them and vetting them and so on and released them [Thursday].”

These hundreds of emails detail communications between the NYPD Intelligence Bureau’s Criminal Intelligence Section on the location of protesters and Black Lives Matter events.

“It’s significant that this surveillance operation was led by the Criminal Intelligence Section of the NYPD,” said Williams. “There was a presumption of criminality reflected in how the NYPD treated these protests and even leading to the decision to assemble and lead this ongoing operation.”

Officers paid particular attention to “cop watchers,” according to the documents, and took multiple photos of activists who wore uniforms identifying themselves as Cop Watch members.

Anyone can legally record the police, but the Justice Committee, a grassroots organization against police violence, has a specific Cop Watch Project for which activists wear shirts that identify them as cop watchers.

The NYPD took multiple pictures of these cop watchers as part of their Black Lives Matter surveillance, sharing the photos with notes like “coordinater [sic] at times square. Has walkie talkie” and “This is a picture of one of the guys that was on the two way radios organizing crowds to different locations… he was calling a protester ‘85 to go to 7/42 to shut down the traffic.”

Although these emails wrongly identify that particular cop watcher as a leader of the Black Lives Matter protests, they are significant, Williams said, because they show the NYPD’s alleged “animosity” towards these cop watchers.

“These were the protests in response largely to the failure to indict [Officer] Daniel Pantaleo for killing Eric Garner. People know about Eric Garner because Ramsey Orta was filming it,” said Williams. “I think the NYPD has a lot of ire, a lot of animosity towards cop watchers because of that particular instance but also because they’re organizing to defend the community against police brutality and police murders.”

Loyda Colon, co-director of Justice Committee and Communities United for Police Reform, said in a statement that the committee condemns any attempt by the NYPD “to surveil, interfere with, and/or criminalize New Yorkers’ efforts to increase community safety by engaging in Cop Watch.”

There are limits to how long the NYPD can retain their political surveillance, unless it relates to “potentially unlawful or terrorist activity.” Williams said the NYPD would not have turned over these records if there were an active investigation, but the fact that the department held on to these images years later is concerning.

Those limits are part of the Handschu consent decree, which the NYPD said in a statement that it "fully complies with."

"The NYPD does not interfere with Constitutionally-protected activities, and did not investigate Black Lives Matter as a political organization or movement," the department said. "The NYPD was focused on ensuring the safety of the public, protesters and officers at these events. ...The vast majority of these demonstrators cooperated with police efforts, and the NYPD helped facilitate these protests by moving along with them, when necessary stopping traffic to aid in the demonstrators safe movements."

Still, the records of Black Lives Matter protest surveillance are worrisome, experts say, because it could deter people from protesting at all.

“There are many people who don’t protest because they don’t want to be filmed by the police, they don't want to risk arrest,” Williams said. Surveillance operations are done with the understanding that they are intimidating, she added, and “the knowledge and fear of surveillance, in addition to fact of surveillance, tends to damage movements.”

The NYPD said in a statement that its investigations focused on individuals who "had specific plans to go beyond lawful protest," like disrupting New York City by blocking traffic on bridges, tunnels and main avenues.

“The monitoring of publicly available social media channels, and the use of plainclothes officers to report on movements of large crowds and any detected plans to commit illegal activity, are legally permissible and routine police work," the statement continued. "The communications reflected in the emails describe the movements of large groups of protestors with a focus on preventing violence or the mass disruption of traffic. These are responsibilities that fit squarely within the guidelines that dictate the NYPD’s lawful activities during major demonstrations that may involve disorder or impact the safety of New Yorkers.”

Thanks to a separate FOIL filing by another attorney, more records concerning the NYPD’s attempt to spy on Black Lives Matter protests could soon come to light.

A New York State judge ruled Monday that the NYPD needed to disclose whether it spied on Black Lives Matter protesters and used devices to interfere with activists’ cell phones at protests.

This ruling came after the NYCLU and protesters affiliated with the Movement for Black Lives were denied information. Williams is not involved in that case, but has been following it and said the two efforts are “pieces of the same puzzle.”