The NYPD organized a citywide surveillance effort of Black Lives Matter protesters, according to nearly 700 emails obtained by an attorney.

The emails also reveal that the department has held on their findings, including photographs of individual activists, nearly four years later, raising First Amendment concerns. 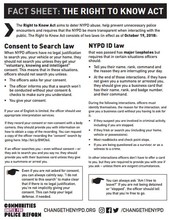 For months, Mayor de Blasio has promoted that his administration will stand against Trump's racist attacks on immigrants and people of color. Yet everyday, these same communities are criminalized and targeted by the NYPD's abusive, discriminatory "broken windows" policing, a practice that is consistent with Trump's racist policing agenda by fueling incarceration and immigration enforcement. New Yorkers need concrete actions by our local officials to make our city a true sanctuary for all.

CPR members are hosting FREE Know Your Rights trainings across the city this Spring to empower New Yorkers with critical information about their rights. The trainings will provide attendees with an understanding of their rights during encounters with the NYPD, ICE and FBI, and tools to stay as safe as possible during these different types of law enforcement interactions.

The highly publicized NYPD brutality against Black athletes has brought fresh spotlight to hyper-aggressive policing and use of excessive force by our city's police department. But New Yorkers in communities across the city frequently experience this police abuse without the same response from City Hall and 1 Police Plaza. It's a reason we continue our work to make NYC safer by holding police accountable to all New Yorkers and advancing systemic reforms that can help end abusive and discriminatory policing. We are gaining momentum in our fight and remain undeterred by NYPD media announcements that seek to quell demands for real, lasting reforms rather than deliver substantive changes for our communities.

The first step in protecting your rights is knowing them! CPR has developed a brief booklet to help New Yorkers of all backgrounds understand their rights when interacting with the police.  Print copies are available through CPR member groups, or you can download it here.