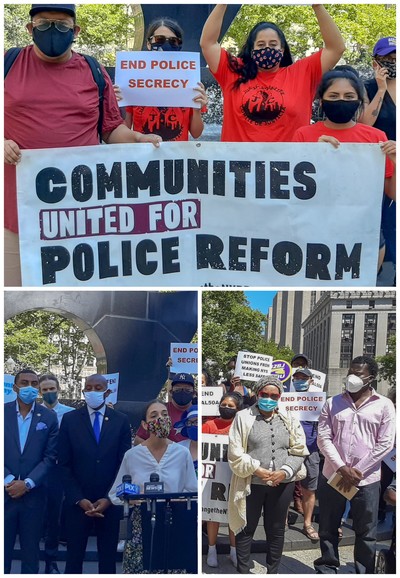 “Following today’s hearing, we hope the court will dismiss the baseless police unions’ request for a preliminary injunction seeking to block the City from publishing officer misconduct databases,” said Anthonine Pierre, spokesperson for Communities United for Police Reform.  “The police unions want to use the courts and their outsized financial resources to undermine the will of New Yorkers and the democratically-elected state legislature by trying to keep the majority of police misconduct and discipline records hidden from public view. Hundreds of thousands of New Yorkers marched, protested, and organized throughout New York state for police transparency, accountability, and the repeal of NY’s notorious police secrecy law, “50-a”. The court’s decision will play a crucial role in our ongoing fight to put in place a system where police are held accountable for their actions and New Yorkers do not live in fear. CPR led the historic campaign to #Repeal50a, and we will continue to push back against the police unions’ attempts to roll back this important victory for transparency, accountability, and democracy.”

In June, the New York State legislature passed - and Governor Cuomo signed - the historic repeal of 50-a, the infamous police secrecy law that was used by police departments to hide police misconduct and discipline from the public. Communities United for Police Reform (CPR) led the statewide coalition and campaign that won #Repeal50a.

In July, CPR, represented by the Center for Constitutional Rights and the law firm Orrick, Herrington & Sutcliffe, filed a motion to intervene in the lawsuit brought by five New York City police unions, as well as corrections and firefighter unions, earlier in the month. The police unions seek to block New York City (NYC) from publishing databases of officer misconduct and discipline information and to roll back the repeal of 50-a. On July 22, a federal judge issued a temporary restraining order, temporarily blocking the release of the databases.

CPR held a rally in Foley Square in downtown Manhattan before today’s federal hearing to condemn the police unions’ attempt to re-entrench police secrecy and roll back #Repeal50a. The rally featured diverse stakeholders all vehemently opposing the police unions’ request for a preliminary injunction, with representatives from CPR in attendance, as well as:

The amicus briefs opposing the preliminary injunction were filed by the following - and links to the briefs can be found here: