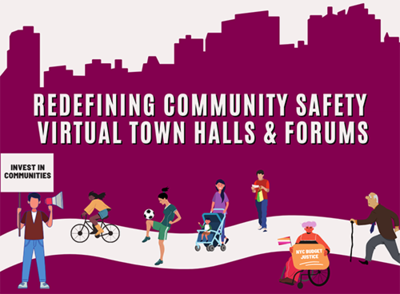 A preliminary list of Redefining Community Safety town halls and forums can be found here. Additional events will be updated on this page throughout February.

Contrary to the requirements of Governor Cuomo’s executive order, Mayor de Blasio has allowed the NYPD to lead the City’s process of public engagement that will result in NYC’s plan. The NYPD attempted to create an illusion of community engagement—a requirement of the executive order—by holding virtual events, but these events served as NYPD propaganda sessions and did not include many of the organizations with the most significant and long-standing experience fighting police violence or the many family members whose loved ones were killed by the NYPD and who help lead NYC’s police accountability movement. The Mayor’s office convened a committee of stakeholders for one meeting in the fall of 2020 to lead a broader community engagement and plan drafting process for the City, but ended that committee without notice, after concerns about NYPD control were raised in the first meeting.

The City’s plan—which must be approved by the City Council—is due on April 1st and in early January, the NYPD and the Mayor’s office both refused to provide any details of the plan’s likely substance during a City Council hearing on the subject.

Statements from organizers of the RedefiningCommunity Safety series are below:

Adilka Pimentel spokesperson for Communities United for Police Reform: “It’s clear that the City's process to ‘reform and reinvent’ policing has been a sham from the start and will not result in any more safety from police violence for Black, Latinx and other communities of color. Our Redefining Community Safety Town Halls are an opportunity for the public to share their vision of what will create safe & healthy communities, especially for communities that regularly experience violence from the police. Our series of virtual town halls and teach-ins are the real speakers’ corner, free from NYPD propaganda and free from the Mayor’s continued deceit and inaction around police violence.”

Damala Denny, Girls for Gender Equity: “We are excited to be participating in conversations with community, especially young people, about the future we want to live in, one where the NYPD is not committing acts of sexual violence against cisgender and transgender girls and non-binary community members. We look forward to participating in the Redefining Community Safety Town Halls and Forums and bringing awareness to the issue of police sexual misconduct and our vision for safety, healing, and freedom.”

Andrea Ritchie, author of Invisible No More: Police Violence Against Black Women and Women of Color and researcher at Interrupting Criminalization: "Organizers working to defund police and invest in community safety are often asked: what about domestic violence, sexual assault, homophobic and transphobic violence? What is invisible in our conversations about gender-based violence is the fact that police are primary perpetrators of violence, fail to protect the vast majority of survivors who don't call them in the first place, and often brutalize and criminalize those who do. Defunding police is a survivor-led strategy to increase the options for prevention, intervention and healing for people who experience gender-based violence."

London Arnold, Organizer, Justice Committee: “We constantly hear Mayor de Blasio and the NYPD talk about supposed police reforms, but we know that these calls will only lead to our communities being left in the same condition: over-policed, under-resourced, and underfunded. We are sick of their attempts to pass public relations maneuvers off as meaningful change, like the City's sham ‘police reform and re-invention’ process and NYPD's backward disciplinary matrix, which will only serve to shield abusive officers, like those who brutalized protesters during the summer and those involved in the Bronx killings of Ramarley Graham, Antonio Williams, Kawaski Trawick, Alan Feliz, and too many others. We are holding the Bronx Town Hall to ensure the voices of our community are heard, have learned from the lived experiences of our people, and to build Bronx communal power and leadership that is grounded in a vision of a Bronx that is liberated from police violence and control.”

Samah Sisay, Attorney and Bertha Justice Fellow at the Center for Constitutional Rights: “As we have learned during the Floyd stop-and-frisk Joint Remedial Process, efforts to reform the NYPD are inherently meaningless without substantive input from communities most heavily impacted by abusive and discriminatory policing practices. Our Redefining Community Safety Town Halls are an opportunity for the public to engage in conversations about what real safety looks like and demand immediate action from the City to hold the NYPD accountable for continuing police violence despite years of training and reform efforts.”

Toni Smith-Thompson, senior organizer, NYCLU: “Reimagining public safety requires centering the communities most impacted by police abuse and not letting the NYPD set the agenda The Redefining Community Safety Town Halls and Forums will create space for young people and people who have experienced police violence while exercising their First Amendment rights, free from the NYPD’s feigned attempts at community outreach. We hope that these forums will serve as an opportunity for New Yorkers themselves to rethink how we can create alternative structures for community health and safety.”

Corey Stoughton, Attorney-in-Charge of the Special Litigation Unit with the Criminal Defense Practice at The Legal Aid Society: “Mayor Bill de Blasio had a chance to bring New York City together to collaborate on a plan to transform the NYPD into a department that better serves the people of this city. He failed, but that does mean community voices can be sidelined in this process. Whether in organizing our own town halls or organizing street protests, New Yorkers will do what it takes to be heard on the question of how our city should be policed.”